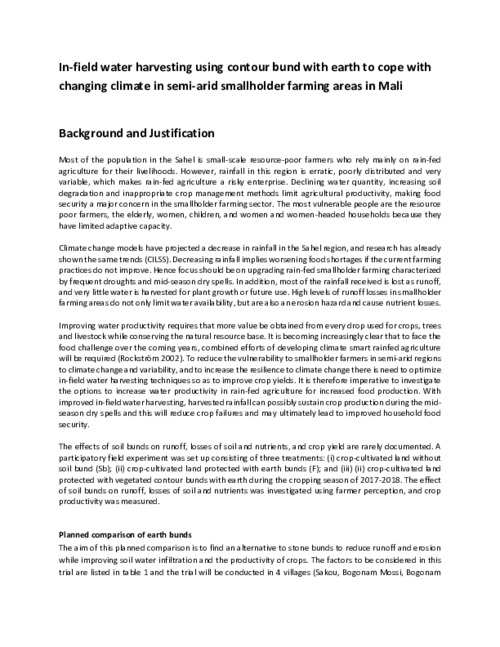 Most of the population in the Sahel is small-scale resource-poor farmers who rely mainly on rain-fed agriculture for their livelihoods. However, rainfall in this region is erratic, poorly distributed and very variable, which makes rain-fed agriculture a risky enterprise. Declining water quantity, increasing soil degradation and inappropriate crop management methods limit agricultural productivity, making food security a major concern in the smallholder farming sector. The most vulnerable people are the resource poor farmers, the elderly, women, children, and women and women-headed households because they have limited adaptive capacity. Climate change models have projected a decrease in rainfall in the Sahel region, and research has already shown the same trends (CILSS). Decreasing rainfall implies worsening food shortages if the current farming practices do not improve. Hence focus should be on upgrading rain-fed smallholder farming characterized by frequent droughts and mid-season dry spells. In addition, most of the rainfall received is lost as runoff, and very little water is harvested for plant growth or future use. High levels of runoff losses in smallholder farming areas do not only limit water availability, but are also an erosion hazard and cause nutrient losses. Improving water productivity requires that more value be obtained from every drop used for crops, trees and livestock while conserving the natural resource base. It is becoming increasingly clear that to face the food challenge over the coming years, combined efforts of developing climate smart rainfed agriculture will be required (Rockström 2002). To reduce the vulnerability to smallholder farmers in semi-arid regions to climate change and variability, and to increase the resilience to climate change there is need to optimize in-field water harvesting techniques so as to improve crop yields. It is therefore imperative to investigate the options to increase water productivity in rain-fed agriculture for increased food production. With improved in-field water harvesting, harvested rainfall can possibly sustain crop production during the mid-season dry spells and this will reduce crop failures and may ultimately lead to improved household food security. The effects of soil bunds on runoff, losses of soil and nutrients, and crop yield are rarely documented. A participatory field experiment was set up consisting of three treatments: (i) crop-cultivated land without soil bund (Sb); (ii) crop-cultivated land protected with earth bunds (F); and (iii) (ii) crop-cultivated land protected with vegetated contour bunds with earth during the cropping season of 2017-2018. The effect of soil bunds on runoff, losses of soil and nutrients was investigated using farmer perception, and crop productivity was measured.