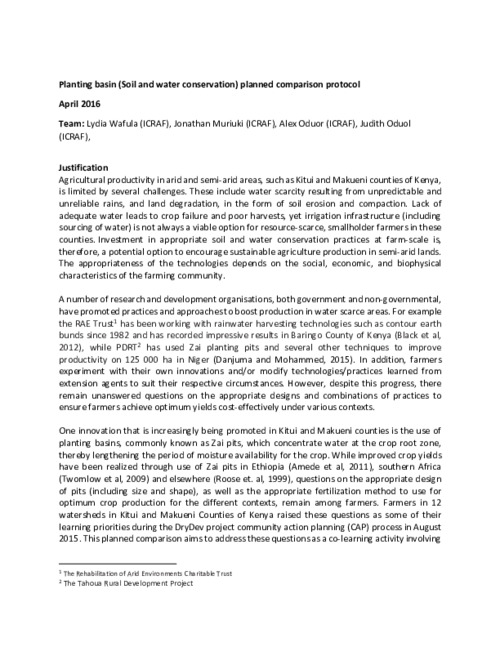 Agricultural productivity in arid and semi-arid areas,such as Kitui and Makueni counties of Kenya, is limited by several challenges. These include water scarcity resulting from unpredictable and unreliable rains, and land degradation, in the form of soil erosion and compaction. Lack of adequate water leads to crop failure and poor harvests, yet irrigation infrastructure (including sourcing of water) is not always a viable option for resource-scarce, smallholder farmers in these counties. Investment in appropriate soil and water conservation practices at farm-scale is, therefore, a potential option to encourage sustainable agriculture production in semi-arid lands. The appropriateness of the technologies depends on the social, economic, and biophysical characteristics of the farming community. A number of research and development organisations, both government and non-governmental, have promoted practices and approaches to boost production in water scarce areas. For example the RAE Trust1 has been working with rainwater harvesting technologies such as contour earth bunds since 1982 and has recorded impressive results in Baringo County of Kenya (Black et al, 2012), while PDRT2 has used Zai planting pits and several other techniques to improve productivity on 125 000 ha in Niger (Danjuma and Mohammed, 2015). In addition, farmers experiment with their own innovations and/or modify technologies/practices learned from extension agents to suit their respective circumstances. However, despite this progress, there remain unanswered questions on the appropriate designs and combinations of practices to ensure farmers achieve optimum yields cost-effectively under various contexts. One innovation that is increasingly being promoted in Kitui and Makueni counties is the use of planting basins, commonly known as Zai pits, which concentrate water at the crop root zone, thereby lengthening the period of moisture availability for the crop. While improved crop yields have been realized through use of Zai pits in Ethiopia (Amede et al, 2011), southern Africa (Twomlow et al, 2009) and elsewhere (Roose et. al, 1999), questions on the appropriate design of pits (including size and shape), as well as the appropriate fertilization method to use for optimum crop production for the different contexts, remain among farmers. Farmers in 12 watersheds in Kitui and Makueni Counties of Kenya raised these questions as some of their learning priorities during the DryDev project community action planning (CAP) process in August 2015. This planned comparison aims to address these questions as a co-learning activity involving scientists, development agents and farmers in these watersheds, as part of DryDev’s farmer-led action learning component.