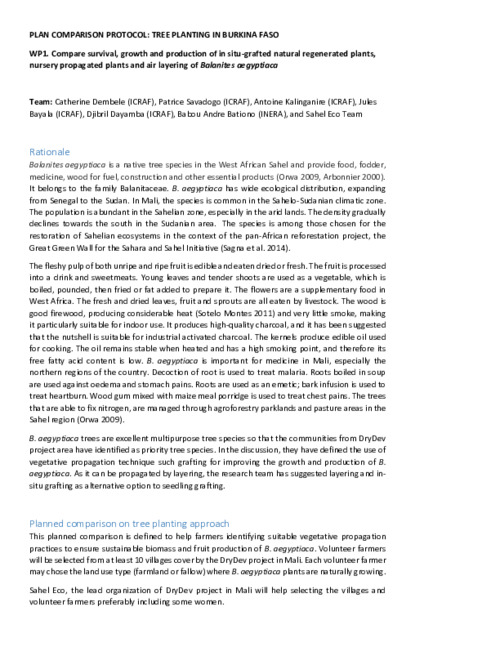 Balanites aegyptiaca is a native tree species in the West African Sahel and provide food, fodder, medicine, wood for fuel, construction and other essential products (Orwa 2009, Arbonnier 2000). It belongs to the family Balanitaceae. B. aegyptiaca has wide ecological distribution, expanding from Senegal to the Sudan. In Mali, the species is common in the Sahelo-Sudanian climatic zone. The population is abundant in the Sahelian zone, especially in the arid lands. The density gradually declines towards the south in the Sudanian area. The species is among those chosen for the restoration of Sahelian ecosystems in the context of the pan-African reforestation project, the Great Green Wall for the Sahara and Sahel Initiative (Sagna et al. 2014). The fleshy pulp of both unripe and ripe fruit is edible and eaten dried or fresh. The fruit is processed into a drink and sweetmeats. Young leaves and tender shoots are used as a vegetable, which is boiled, pounded, then fried or fat added to prepare it. The flowers are a supplementary food in West Africa. The fresh and dried leaves, fruit and sprouts are all eaten by livestock. The wood is good firewood, producing considerable heat (Sotelo Montes 2011) and very little smoke, making it particularly suitable for indoor use. It produces high-quality charcoal, and it has been suggested that the nutshell is suitable for industrial activated charcoal. The kernels produce edible oil used for cooking. The oil remains stable when heated and has a high smoking point, and therefore its free fatty acid content is low. B. aegyptiaca is important for medicine in Mali, especially the northern regions of the country. Decoction of root is used to treat malaria. Roots boiled in soup are used against oedema and stomach pains. Roots are used as an emetic; bark infusion is used to treat heartburn. Wood gum mixed with maize meal porridge is used to treat chest pains. The trees that are able to fix nitrogen, are managed through agroforestry parklands and pasture areas in the Sahel region (Orwa 2009). B. aegyptiaca trees are excellent multipurpose tree species so that the communities from DryDev project area have identified as priority tree species. In the discussion, they have defined the use of vegetative propagation technique such grafting for improving the growth and production of B. aegyptiaca. As it can be propagated by layering, the research team has suggested layering and in-situ grafting as alternative option to seedling grafting.