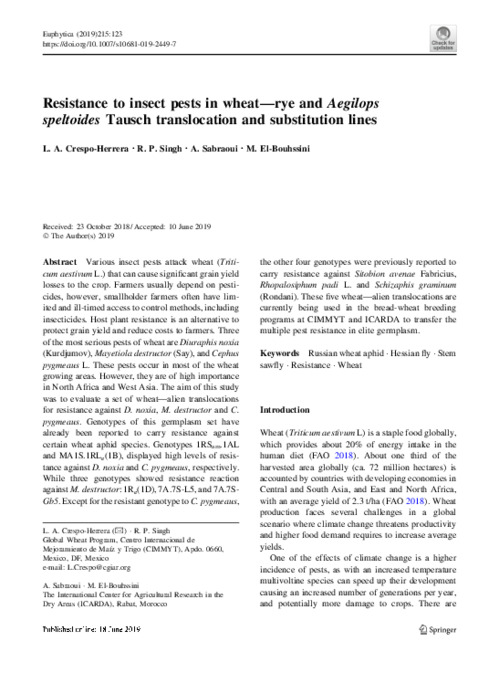 Various insect pests attack wheat (Triticum aestivum L.) that can cause significant grain yield losses to the crop. Farmers usually depend on pesticides, however, smallholder farmers often have limited and ill-timed access to control methods, including insecticides. Host plant resistance is an alternative to protect grain yield and reduce costs to farmers. Three of the most serious pests of wheat are Diuraphis noxia (Kurdjumov), Mayetiola destructor (Say), and Cephus pygmeaus L. These pests occur in most of the wheat growing areas. However, they are of high importance in North Africa and West Asia. The aim of this study was to evaluate a set of wheat—alien translocations for resistance against D. noxia, M. destructor and C. pygmeaus. Genotypes of this germplasm set have already been reported to carry resistance against certain wheat aphid species. Genotypes 1RSam.1AL and MA1S.1RLe(1B), displayed high levels of resistance against D. noxia and C. pygmeaus, respectively. While three genotypes showed resistance reaction against M. destructor: 1Re(1D), 7A.7S-L5, and 7A.7S-Gb5. Except for the resistant genotype to C. pygmeaus, the other four genotypes were previously reported to carry resistance against Sitobion avenae Fabricius, Rhopalosiphum padi L. and Schizaphis graminum (Rondani). These five wheat—alien translocations are currently being used in the bread-wheat breeding programs at CIMMYT and ICARDA to transfer the multiple pest resistance in elite germplasm.