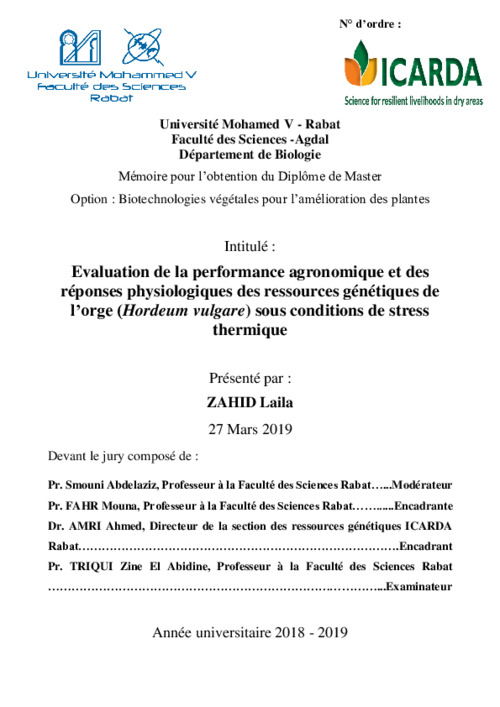 Our study evaluated barley genotypes (Hordeum vulgare L.) of different origins, for their tolerance to heat. The trials were conducted at two contrasting environments: Marchouch (optimal conditions) and Wad Medani (heat stress conditions) during the 2017-2018 season. The genotypes included Moroccan varieties, Australian varieties, genebank accessions selected using the FIGS approach (named Landraces), promising lines of ICARDA and isolated intra-cultivar selection lines which are isolated for their high yield potential. The trials are conducted using the alpha-lattice design with two repetitions. In both environments, physiological characteristics (chlorophyll fluorescence and canopy temperature), phenological (days to heading, days to maturity, grain filling period) and agronomic traits which have a relation with yield and its components (number of spikes / m², number of grains per spike, biological yield and grain yield) were measured. The harvest index and four heat stress tolerance indices were calculated based on grain yield in both environments. In addition, a correlation analysis between all traits was performed. The results of this study highlighted the negative effects of heat stress on growth and development of the studied genotypes. These effects were manifested by a reduction in photosynthetic activity, an increase in canopy temperature, a shortening of the plant growth cycle, with a decrease in yield and its components. The heat stress tolerance is shown for some genotypes in the stressed environment, when compared with the results in the optimal conditions In terms of grain yield, five accessions selected using the FIGS approach recorded high grain yield under heat stress conditions, and the highest yields under heat stress were obtained for the Australian varieties: Keel and Gairdner. The heat tolerance indices, the GM (Geometric Mean) and HTI (Heat Tolerance Index) values showed varieties combining the two traits: high grain yield potential and heat stress tolerance index. These varieties are: Baudin, Capstan, IH4-H4 and IH17. A correlation analysis in both environments showed different degrees of significance between physiological, phenological and agronomic traits.