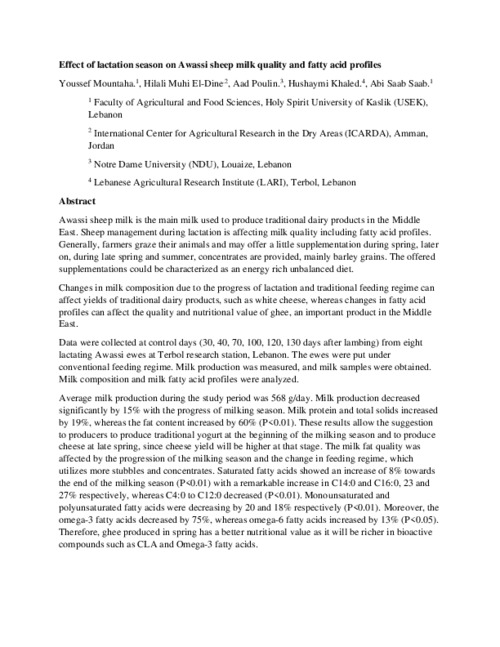 Awassi sheep milk is the main milk used to produce traditional dairy products in the Middle East. Sheep management during lactation is affecting milk quality including fatty acid profiles. Generally, farmers graze their animals and may offer a little supplementation during spring, later on, during late spring and summer, concentrates are provided, mainly barley grains. The offered supplementations could be characterized as an energy rich unbalanced diet. Changes in milk composition due to the progress of lactation and traditional feeding regime can affect yields of traditional dairy products, such as white cheese, whereas changes in fatty acid profiles can affect the quality and nutritional value of ghee, an important product in the Middle East. Data were collected at control days (30, 40, 70, 100, 120, 130 days after lambing) from eight lactating Awassi ewes at Terbol research station, Lebanon. The ewes were put under conventional feeding regime. Milk production was measured, and milk samples were obtained. Milk composition and milk fatty acid profiles were analyzed. Average milk production during the study period was 568 g/day. Milk production decreased significantly by 15% with the progress of milking season. Milk protein and total solids increased by 19%, whereas the fat content increased by 60% (P<0.01). These results allow the suggestion to producers to produce traditional yogurt at the beginning of the milking season and to produce cheese at late spring, since cheese yield will be higher at that stage. The milk fat quality was affected by the progression of the milking season and the change in feeding regime, which utilizes more stubbles and concentrates. Saturated fatty acids showed an increase of 8% towards the end of the milking season (P<0.01) with a remarkable increase in C14:0 and C16:0, 23 and 27% respectively, whereas C4:0 to C12:0 decreased (P<0.01). Monounsaturated and polyunsaturated fatty acids were decreasing by 20 and 18% respectively (P<0.01). Moreover, the omega-3 fatty acids decreased by 75%, whereas omega-6 fatty acids increased by 13% (P<0.05). Therefore, ghee produced in spring has a better nutritional value as it will be richer in bioactive compounds such as CLA and Omega-3 fatty acids.