Analysis of Economic and Environmental Impacts of Salinity on Livelihoods of Farmers in Iraq: An Examination of Economic Efficiency For Wheat Farms in Wasit Province 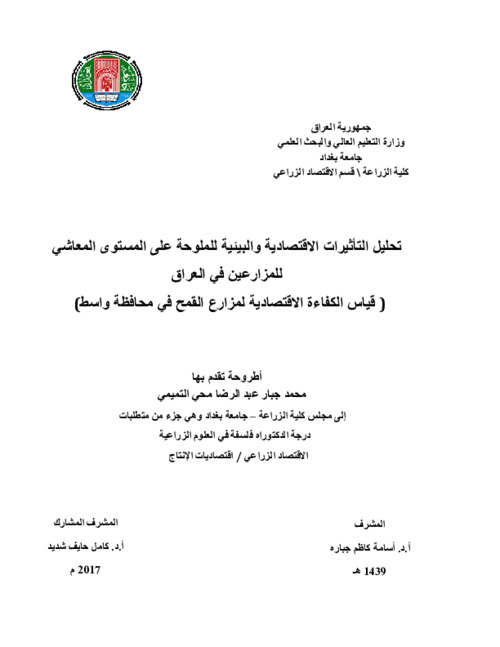 Mohammed Abdulradh. (1/7/2019). Analysis of Economic and Environmental Impacts of Salinity on Livelihoods of Farmers in Iraq: An Examination of Economic Efficiency For Wheat Farms in Wasit Province.

The intensity and diversity of problems in the Iraqi agriculture sector have been of enormous proportions and have made it very difficult for most farmers to deal with the situation. At farm level, salinity has been a constraining factor affecting agricultural productivity. In view of this context, and in addition to previous studies, this paper specifically focuses on examining the impact of salinity on agricultural productivity and total gross margin. That is, it is an integrated analysis of the effect of salinity on agricultural productivity and profitability of farms in salt-affected areas in Central Iraq. In Iraq many study have been focusing on the relationship between agricultural productivity and irrigation water salinity, but, from publication stand point, the relationship between agricultural productivity and soil salinity have been ignored. Analysis of the socioeconomic and policy constraints and opportunities for the effective use and remediation of saline land and water resources in central and southern Iraq at the basin, irrigation project, and farm scales and to identify and measure their impacts. The fact is that wheat farmers reach different levels of economic efficiency. The hypothesis to be tested is whether soil and water salinity reduce the economic efficiency of wheat farmers in the study area. This study set out to investigate the impact of soil salinity on Economic efficiency (EE) and environmental efficiency (En.E) in wheat production in central Iraq, where 360 farmers interviewed in winter season 2015-2016. The main objective of this study is to consider how farmers could reallocative their resource in efficient and sustainable ways to produce viable agricultural production in the salt-affected areas of Iraq without introducing a new technology. Parametric approach employed to estimate a frontier of production. Stochastic frontier analysis (SFA) is proposed for estimates EE and En.E in irrigated wheat production system with respect to soil electric conductivity value. The results showed that, the mean level of EE was 60% for low.