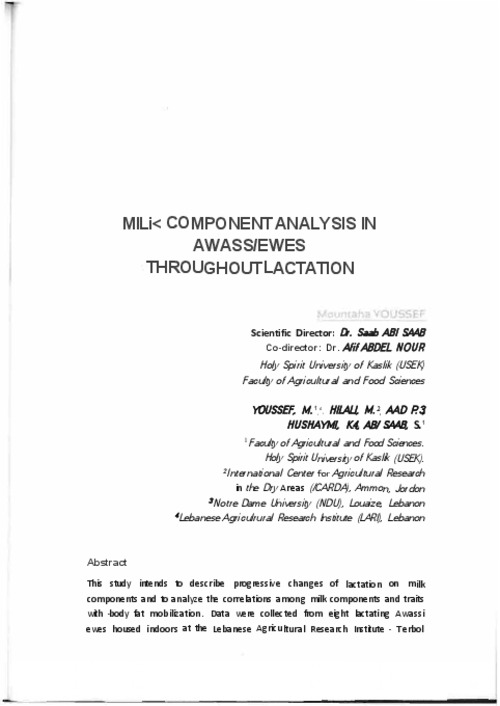 This study intends to describe progressive changes of lactation on milk components and to analyze the correlations among milk components and traits with ·body fat mobilization. Data were collected from eight lactating Awassi ewes housed indoors at the Lebanese Agricultural Research Institute - T erbol research station, under conventional feeding regimen. Milk composition and production parameters including ewe body condition score (BCS) and weight (BW), toil circumference (FTC) were recorded during lactation period from February till August 2017 on days (D) 0, 10, 20, 30, 40, 70, 100, 120, and 130 after lambing. Milk fat, protein, total solids (TS), lactose, solids non fat (SnF), acidity, density and freezing point (FP) were measured using infrared spectrometry (Milkoscon, FT 120, Foss Electric). Preliminary results showed positive correlation between BCS and BW, as well as between BCS and FTC (r = 0. 77 and 0. 80 respectively). Moreover, milk acidity, TS, SnF and milk protein followed the some pattern where they were highest by DO (l 5.77±0.66°SH, 20.43±0.84%, 11.92±0.34%, 6.61 ±0.20% respectively), decreased by Dl O and then recovered to lower levels than the first milk by Dl 30 showing significant differences (P<0.05). However, lactose followed on opposite pattern where it was lowest in the first milk DO (3.85±0.2%) and then increased at Dl O (4.83±0.22%), decreased significantly (P<0.05) and steadily till Dl 30. Fat stayed high until 020 (7.30±0.58%) and then dropped significantly by 030 (4.71 ±0.58%), recovering gradually until 0130 to lower levels than the first milk. On the other hand, milk density and FP showed steady variations. The findings indicate that lactation stages contribute to the variation in milk composition during lactation.