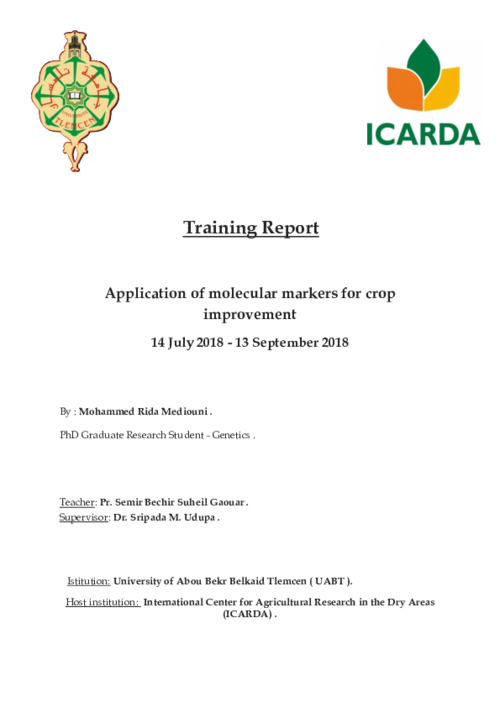 Characterization of cereal cultivars by DNA-markers provides powerful tool to precise the identification and quantify the genetic diversity and to estimate the phylogenetic relationship among genotypes in many crop species. The results of the present study realized between Jull and Sep 2018 in biotechnologie unit (ICARDA, Morocco) which aimed to characterize a subset of 10 Algerian selected Chickpea cultivars ( Cicer arietinum L ) , using 15 SSR (Single Sequence Repeat) indicated the presence of a total of 61 alleles. The genetic diversity at the 15 microsatellites loci was varied from 0,32 for TA22 to 0.78 for TA72 and TA117 with an average of 0.66 . Polymorphic information content (PIC) values ranged from 0.27 to 0.74. Clustering analysis showed that the studied varieties were grouped according to their population of origin, suggesting a provenance effect in their ordination. In fact the most similar varieties were those introduced from Algerien fields , which may have common parents in their pedigree.