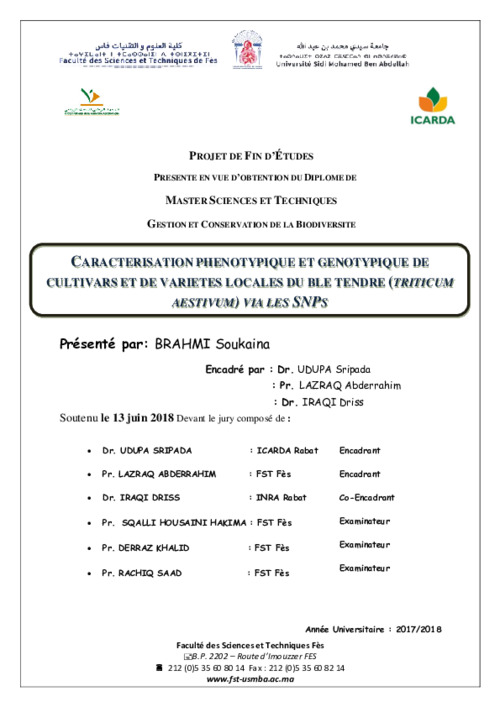 In order to preserve, restore and enhance the diversity of available genetic material, it is first necessary to study its genetic characteristics, which are externally materialized by phenotypic characteristics represented by morphology, phenology and physiology, knowledge of which is a prerequisite for varietal improvement. The soft wheat collection, comprising 27 landraces and 21 improved varieties, was evaluated for agro-morphological characteristics (precocity, number of spikes per plant, height, characteristics of spikes, awn, susceptibility to yellow rust and septoria). Our study focuses on the analysis of specific diversity by studying phenotypic and genotypic traits via molecular markers of the SNPs type, a series of improved varieties and local varieties of common wheat (Triticum aestivum). The dual objective to be achieved is to better understand the adaptation mechanisms established by plants in order to acclimatize with environmental conditions and, on the other hand, to show the discrimination of the different gene pools and the particularities of each series of varieties. Phenotypic trait testing took place in the Marchouch experimental fields during the 2017-2018 crop year. The genotyping analysis was performed in collaboration with the Intertek laboratory in Sweden, it adopts the "KASP genotyping chemistry based on competitive allele-specific PCR.10 SNP type markers were involved. Each of them is associated with genes of interest which are of two types: disease resistance genes and mainly rust, and dwarfism genes, namely (Lr34, Sr2, Lr68, RhtB1, RhtD1, Lr19/sr25, Lr67, Sr22, Lr46 and Lr37/Yr17, Sr38); Studies have shown significant differences between the two sets of varieties for certain characteristics.