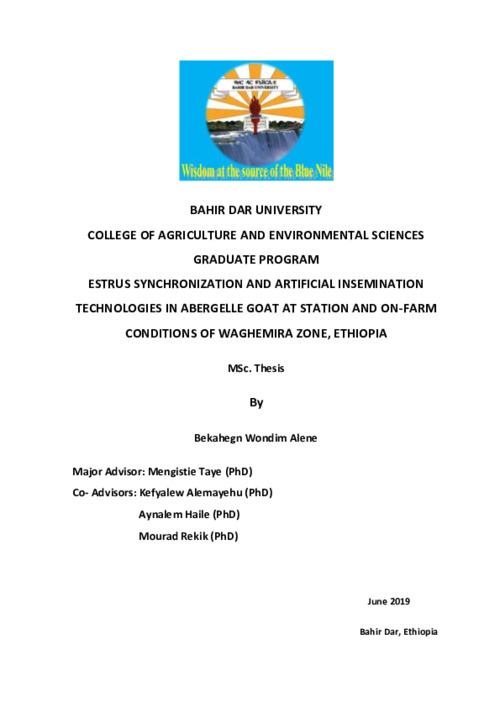 Reproductive bio-technological tools are important to suit kidding time with better forage availability and accelerate improved genetics in the selective breeding programs. The study was conducted from 2018 - 2019 to investigate the effect of different estrus synchronization protocols on estrus response and conception rate of Abergelle goats with fixed time artificial insemination (AI). The protocols evaluated were: 1) Pregnant mare serum gonadatropins (PMSG+Enzaprost), 2) single, and 3) double injection of prostaglandin (PGF2α). Semen characteristics of Abergelle bucks under station and CBBP management conditions were also investigated. The perception of farmers on the reproductive technologies was assessed using a semi-structured questionnaire. A total of 35 (station = 92 and CBBP site = 243) Abergelle does were used for the experiment. For the on-station experiment, 25 does were distributed for each of the treatment groups and 17does were allocated as a control group. For the on-farm experiment, 73 does for PMSG+Enzaprost, 58 does for PGF2α single injection, 72 does for PGF2α double injection and 40 does for control groups were allocated. For the AI and semen analysis experiment, five bucks from the station and 18 bucks from the CBBP villages were used. At the station, does were allowed to graze for about 8hrs daily followed by supplementation of mixture of 300-350g cowpea hay and wheat bran per day for about ne month before the commencement of the experiment. Similarly, bucks were kept by separate attendant and allowed for grazing for about 4 hrs dally followed by supplementation of the above-specified ration for about one and half month prior to the actual experiment. For the on-farm experiment, does used in the trail were separated from farmers flock and kept by separate attendants, allowed to graze as usual practice by farmers followed by supplementation of similar ration as the on- station per day for about one month before the actual experimental time. Bucks were kept also by separate attendant allowed to graze as usual practice of farmers followed by supplementation of the above-specified ration for about one and a half month prior to the actual experiment period. In both, station and CBBP villages, for the PMSG treatment groups, progesterone impregnated vaginal sponge was inserted at day1 and stayed for 11 days inside, and 48 hrs before sponge removal, 1ml (600IU) PMSG hormone followed by 1ml Enzaprost were administered as a separate injection. For single injection PGF2α treatment groups, 1ml of Enzaprost was administered at day 1. For the PGF2α double injection groups, 1ml of Enzaprost were administered at day 1 and the second 1ml injection of Enzaprost at day 11. All the treatment groups were followed for estrus detection with four hrs interval for about 48 hrs, and AI was performed for those coming to heat. The control groups were left as normal practice and allowed to mate as usual. The study revealed that overall estrus response of 87.6%, 61.4% and 53%were investigated from PMSG+Enzaprost, PGF2α (single injection) and PGF2α (double injection), respectively. The average time for the onset of estrus and estrus duration were 14.4±0.47 hrs and 45.5±0.75 hrs, respectively. The study also revealed that mid parity does (3 and 4th) and does with body condition score of 2.5 and 3 were found to be significantly responsive for estrus (p<0.05). Relatively higher conception rate (p<0.05) was resulted from PGF2α double injection (78.8%) followed by PGF2α single injection (64.7%). A significantly higher (p<0.05) proportion of litter size (1.6±0.22) was resulted from PMSG+Enzaprost. Most of the semen characteristics in the study does not show any significant difference at (p>0.05) against management condition and ejaculate frequency. It was observed that PMSG+ Enzaprost was best responsive (p<0.001) for induction of estrus, and double injection of PGF2α had a shorter (p<0.001) time for the onset of estrus with highest conception rate (p<0.05). It was concluded that according to the type of hormonal treatment, time of AI should be set by considering induction and duration of estrus to achieve a better conception rate.