Gender and Irrigation: Its Implications on Sustainable Agriculture Intensification. The Case of Ntcheu District, Malawi 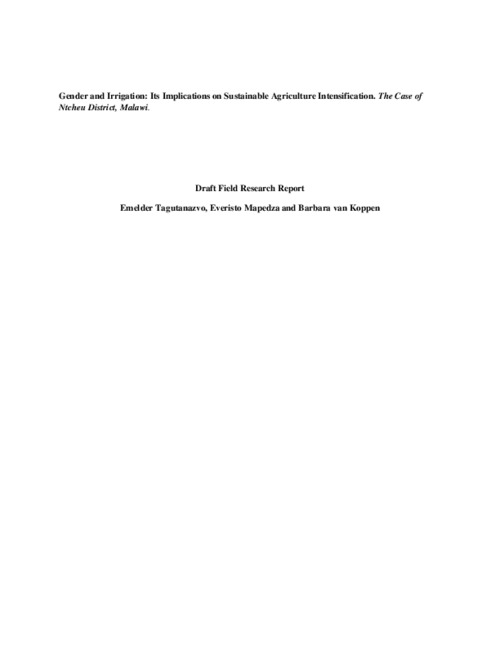 Efforts have been made to intensify crop production through various technologies including irrigation schemes practices in Southern Africa as in other developing countries, however less focus on have been placed on the extent to which gender relations can hinder or be used as leverage to production. The study finds that gendered spaces manifested in differentiated crop choices and labour investment in selected tasks by men and women indicates that gender gaps still exist in the agriculture arena particularly in irrigation schemes where cultural checks and balances are compromised. More over women in Ntcheu are the landholders and have some degree of control on resources such as land and water however they have limited control over markets--a gap that breaks the empowerment cycle. The gendered division of labour in Kaziputa irrigation scheme shapes the promotion of agriculture intensification activities between the default summer- land lords and the dry season- tenants (irrigators). The study utilized key informant interviews, focus group discussions and non-obtrusive observation to get an understanding of the different gendered strategies used to increase production in matrilineal communities such as Ntcheu. This paper concludes that intra-household power dynamics catalyse gender differences that are observed in the fields, markets, management and even in resource ownership and control. The paper therefore recommends that irrigation facilitation be practiced consistently with the existing local cultural tenure systems to protect the existing systems which in matrilineal societies support the interests of women.