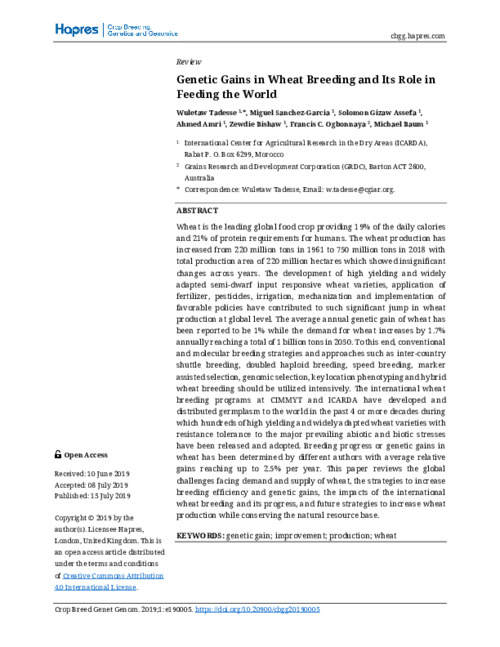 Wheat is the leading global food crop providing 19% of the daily calories and 21% of protein requirements for humans. The wheat production has increased from 220 million tons in 1961 to 750 million tons in 2018 with total production area of 220 million hectares which showed insignificant changes across years. The development of high yielding and widely adapted semi-dwarf input responsive wheat varieties, application of fertilizer, pesticides, irrigation, mechanization and implementation of favorable policies have contributed to such significant jump in wheat production at global level. The average annual genetic gain of wheat has been reported to be 1% while the demand for wheat increases by 1.7% annually reaching a total of 1 billion tons in 2050. To this end, conventional and molecular breeding strategies and approaches such as inter-country shuttle breeding, doubled haploid breeding, speed breeding, marker assisted selection, genomic selection, key location phenotyping and hybrid wheat breeding should be utilized intensively. The international wheat breeding programs at CIMMYT and ICARDA have developed and distributed germplasm to the world in the past 4 or more decades during which hundreds of high yielding and widely adapted wheat varieties with resistance tolerance to the major prevailing abiotic and biotic stresses have been released and adopted. Breeding progress or genetic gains in wheat has been determined by different authors with average relative gains reaching up to 2.5% per year. This paper reviews the global challenges facing demand and supply of wheat, the strategies to increase breeding efficiency and genetic gains, the impacts of the international wheat breeding and its progress, and future strategies to increase wheat production while conserving the natural resource base.