Microfinance in Marginal Dry Areas: Impact of Village Credits and Savings Associations on Poverty in the Jabal al Hoss region in Syria 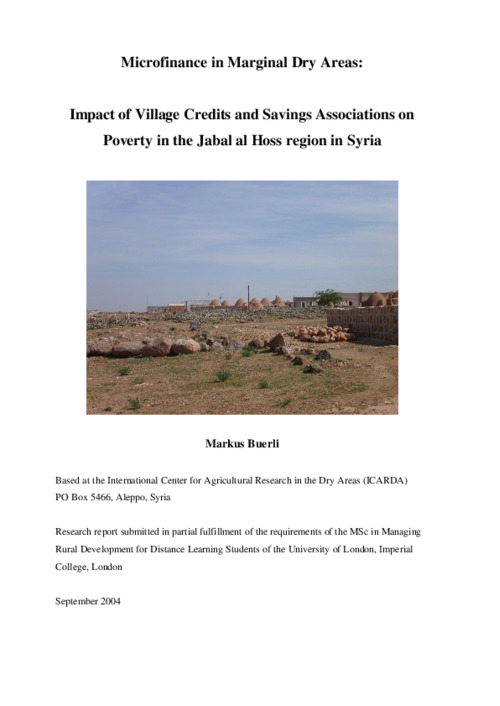 Considering the first nine sanadiq (Village Savings- and Credit-associations) established in September 2000 in the Jabal al Hoss region of northern Syria, this report evaluates their impact on the rural poor until the end of 2003. Using Principle Component Analysis, a household specific poverty index is calculated. This index shows that only about 40% of sanduq members belong to either the Poorest or the Poor categories and more than 60% to the Less Poor. This is mainly due to a biased selection of villages. None of the first nine sanadiq was established in a village with a village index below four indicating that small villages with little public services were excluded from the microfinance program. Unlike formal credit institutions, sanadiq can reach the poorest that otherwise have to rely on informal moneylenders with average interest rates of 77% per year. However, the presence of a sanduq in a village did not lead to a reduction of informal money borrowed. In the three year period considered in this study, it is not possible to show a significant increase in assets or income for sanduq members compared to non-member households from the same villages. However, when compared to the control households, those households from villages with a sanduq show increased assets and a slightly higher income. It is difficult to completely attribute this increased economic status to the presence of a sanduq. It could also be as a result of the training courses provided by the RCDP to the same villages and/or the better infrastructure available in these villages before the sanadiq were established.