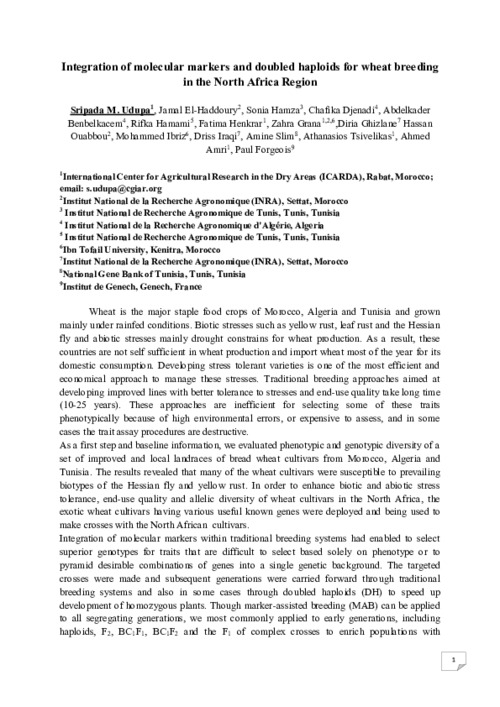 Wheat is the major staple food crops of Morocco, Algeria and Tunisia and grown mainly under rainfed conditions. Biotic stresses such as yellow rust, leaf rust and the Hessian fly and abiotic stresses mainly drought constrains for wheat production. As a result, these countries are not self sufficient in wheat production and import wheat most of the year for its domestic consumption. Developing stress tolerant varieties is one of the most efficient and economical approach to manage these stresses. Traditional breeding approaches aimed at developing improved lines with better tolerance to stresses and end-use quality take long time (10-25 years). These approaches are inefficient for selecting some of these traits phenotypically because of high environmental errors, or expensive to assess, and in some cases the trait assay procedures are destructive. As a first step and baseline information, we evaluated phenotypic and genotypic diversity of a set of improved and local landraces of bread wheat cultivars from Morocco, Algeria and Tunisia. The results revealed that many of the wheat cultivars were susceptible to prevailing biotypes of the Hessian fly and yellow rust. In order to enhance biotic and abiotic stress tolerance, end-use quality and allelic diversity of wheat cultivars in the North Africa, the exotic wheat cultivars having various useful known genes were deployed and being used to make crosses with the North African cultivars. Integration of molecular markers within traditional breeding systems had enabled to select superior genotypes for traits that are difficult to select based solely on phenotype or to pyramid desirable combinations of genes into a single genetic background. The targeted crosses were made and subsequent generations were carried forward through traditional breeding systems and also in some cases through doubled haploids (DH) to speed up development of homozygous plants. Though marker-assisted breeding (MAB) can be applied to all segregating generations, we most commonly applied to early generations, including haploids, F2, BC1F1, BC1F2 and the F1 of complex crosses to enrich populations with favourable genes and their combinations. MAB also offered the opportunity to hasten transfer of desirable alleles from un-adapted exotic genetic backgrounds into a desirable germplasm through cross-breeding. Marker-linked loci responsible for traits such as resistance to diseases, quality and phenology were selected in the segregating populations and the desired genotypes were carried forward until they reach nearly homozygous. Once, the selected genotypes reach F6 or later generations, they were validated for the selected traits under field conditions. Only lines expressing desired phenotypes were selected for seed increase and subsequent preliminary yield trials and multilocation trials. In Morocco, three bread wheat varieties namely 'Kharoba', 'Khadija' and 'Malika' were released using these tools. In Algeria and Tunisia, integration of these tools in breeding is in progress. In conclusion, application of MAB and DH technologies greatly enhanced efficiency and effectiveness of utilization of the germplasm and enhanced genetic gains in the breeding programs.