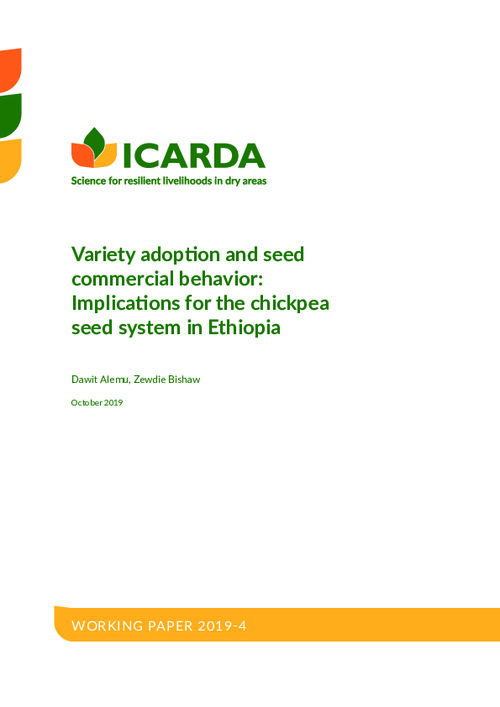 This Working Paper presents the yield gaps, adoption of improved varieties, and commercial behavior relating to seed by smallholder chickpea producers. It is based on primary data generated in 2017 from 612 randomly selected farmers in 18 chickpea-producing districts covering 36 kebeles (lowest administrative units) in two major crop-producing regions of Amhara and Oromia in Ethiopia. The yield gap is estimated based on comparison of yields achieved at research stations, in farmers’ fields with improved varieties and recommended packages, and the national yield. The adoption rate of improved chickpea varieties is estimated at household level, with households categorized into non-adopters, partial adopters, and full adopters. The commercial behavior in chickpea seed is based on absolute market position, which is quantified by comparing the quantity of chickpea seed sold and purchased over a year; possible market positions identified are (i) autarky, neither buyer nor seller, (ii) seller only, (iii) buyer only, and (iv) both buyer and seller. The survey results indicate that most farmers grow desi chickpea (57.5 percent), followed by kabuli chickpea (32.7 percent), and the remaining 9.8 percent grow both.