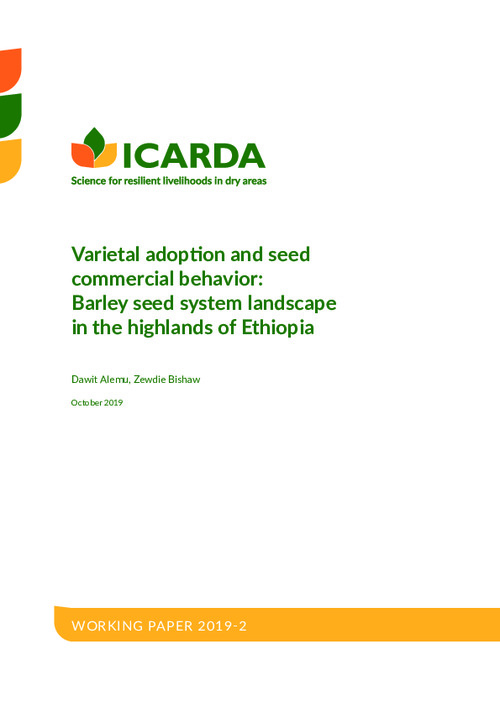 In Ethiopia, barley is among the major cereal crops and is also a food security crop in the highlands and an industrial commodity for the emerging brewing industry. This Working Paper documents the yield gaps, varietal adoption and preferences, and seed commercial behavior based on primary data collected in 2014 from 549 randomly selected barley growers in four major crop production regional states: Amhara, Oromia, South, and Tigray. The results indicate that the national average yield (1.5 metric tons/ha in 2014) is 61 and 29 percent lower than the yield achieved on research stations and farmers’ fields with improved varieties and recommended practices, respectively. The significant yield gap indicates the availability and access to technologies, information, and knowledge reflecting the performance of the seed system, extension services, and other input delivery systems. A total of 37 food barley and 16 malt barley varieties were released primarily by the national agricultural research system, with a few by the private sector, up until 2015. In total, 23.3 and 9.5 percent of barley producers are full and partial adopters, respectively, on a total of 40.6 percent of the area, with variation between food and malt barley. For food barley, 23.3 percent (2.6 percent are women) are full-adopters and the rest (9.5 percent) are partial adopters (<1 percent are women). In contrast, all malt barley growers are adopters, linked with the recent introduction and promotion of the crop for malt supply in the emerging brewing industry. Of released food barley varieties, only seven were identified and grown by farmers: HB-42 (1.3 percent), Shege (1.7 percent), Meserach (5.1 percent), Dimtu (1 percent), Estayish (1 percent), HB-1307 (2.1 percent), and Gobe (<1 percent). Similarly, among 16 released malt barley varieties, farmers identified and use only four varieties: Beka (1.5 percent), Holker (33.3 percent), Miscal 21 (12.8 percent), and Sabini (15.8 percent). The weighted average ages of 16.8 and 23.7 years for food and malt barley varieties, respectively, show low varietal replacement rates in farmers’ fields. Both food and malt barley varieties are considered good for one or more attributes but poor for the others. Consequently, breeding programs need to consider developing varieties with better performance for a broader range of attributes and their dissemination targeting farmers’ unique preferences. In terms of seed use, 15.2 percent of barley producers use certified seed, whereas 14.1 percent purchase non-certified seed and 70.7 percent use own saved seed. Among the adopters of improved varieties, only 8.3 percent of food barley and 38.5 percent of malt barley growers purchase certified seed. This is associated with the huge gap of supply of demanded seed, with only 9 percent of revealed barley seed demand being supplied (4 percent for food and 17 percent for malt barley) and particularly of older varieties in 2014. Commercial behavior concerning food barley seed indicates that 21.2 percent of farmers engage in buying and selling of either certified or non-certified seed and the remaining 78.8 percent are in an autarkic seed market position, where they do not engage in the seed market. This indicates the potential of boosting the productivity and production of food and malt barley in the country by enhancing the seed system for better access and use of quality seed of improved varieties.