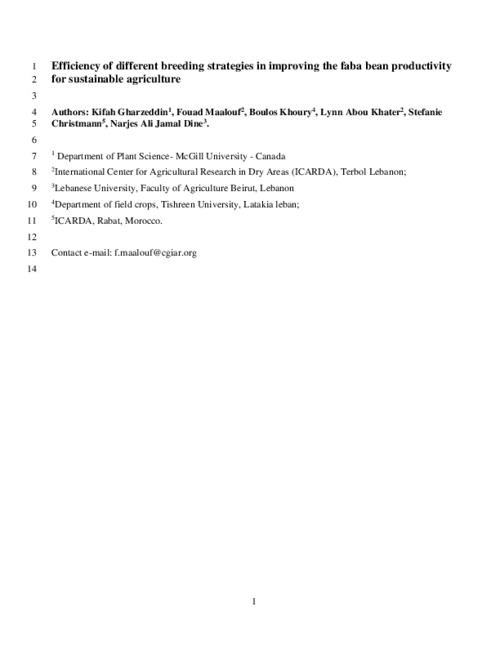 Breeding methods applied to faba bean are either based on self pollination by developing lines under insect proof cages or baed on open pollination by developing lines under natural pollination conditions. The purpose of this research is to compare the performance of pedigree selection method (PSM) as a self pollinated breeding method and recurrent selection methods (RSM) and synthetics (SYN) as an open pollinated method). Eleven diverse accessions were used to develop in F6 generation 24 lines using PSM, 35 lines using RSM and nine synthetics from 2012 to 2016. The different developed lines were evaluated in two winter cropping seasons (2014/2015) and (2016/2017) in an alpha design with two replications. Significant differences among lines and among breeding methods were obtained for biological and grain yield, days to flowering, days to maturity, branches per plant, pods per plant, hundred seed weight. Synthetic populations had higher yield than RSM lines; whereas RSM lines revealed higher yield performance than PSM lines. Multivariate analysis indicates that most of the variation among different lines developed by different methods is due to variation in number of branches, days to flowering, biological and grain yield. Open pollinated cultivars were found to be more appropriate to increase the yield in farmers’ fields and may play a critical role in conserving wild pollinators, but ensuring optimal yields might require capacity building for farmers concerning wild pollinators.