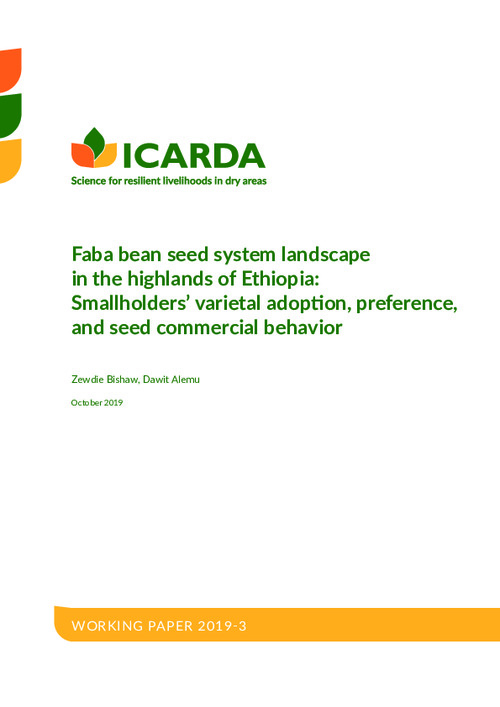 This Working Paper documents the varietal adoption, preferences, and seed commercial behavior based on primary data collected in the 2014 cropping season from 549 randomly selected faba bean growers in four major crop production regional states: Amhara, Oromia, South, and Tigray. The results indicate that the national average yield (1.8 tons/ha in 2014) is 44 and 50 percent lower than the yield achieved on research stations and in farmers’ fields with improved varieties and recommended practices, respectively. This reflects the poor performance of the seed system, extension services, and other input delivery systems. About 29 improved faba bean varieties have been developed and released for different recommended domains, including the mid- and high-altitude agro-ecologies and Vertisols (waterlogged areas) up until 2014. Of faba bean growers, 19 percent are full adopters (all plots use improved varieties), 1.9 percent are partial adopters (one or more plots use improved varieties), and the remaining 79.1 percent are non-adopters (all faba bean plots use local varieties). However, only six improved varieties are recognized by some of the adopting farmers. The weighted average age of the improved varieties under use is 20.5 years although there are a number of recently released varieties with better performance. The improved faba bean varieties demonstrate higher attainment indices for most of the key varietal attributes: grain size, number of pods per plant, and number of seeds per pod. However, it will be important for breeding programs to consider improving varietal traits such as early maturity, cooking ability, and taste because local varieties show higher attainment indices for these traits. The seed commercial behavior of faba bean producers indicates that only 6.4 percent purchase certified seed whereas the remaining 18.5 percent purchase noncertified seed from a local market and 75.1 percent use own saved seed. The difference in the average seed renewal rate by adoption category is not significant, indicating an average of two years for variety renewal for all categories of adoption, although most non-adopters do not renew their seeds. The overall revealed demand for certified seed is low and there is also a considerable gap of supply of demanded seed, with only 45.9 percent of the revealed demand supplied, which could only cover 3.97 percent of the total faba bean area in the 2014 cropping season. The limited engagement of the formal sector seed actors is associated with the lower commercial attractiveness of faba bean compared to other crops like maize due to high grain to seed price ratio. In 2014, the estimated grain to seed price ratio for faba bean was 67 compared to 27 percent for hybrid maize. The limited amount of certified seed is often produced by public seed enterprises, primarily the Ethiopian Seed Enterprise. These results indicate the potential for increasing productivity and production of faba bean in the country by strengthening the seed delivery system through better access and use of seed of improved varieties.