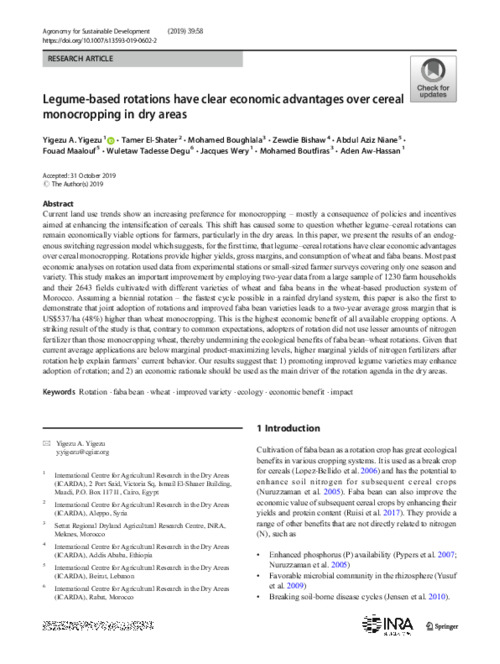 Current land use trends show an increasing preference for monocropping – mostly a consequence of policies and incentives aimed at enhancing the intensification of cereals. This shift has caused some to question whether legume–cereal rotations can remain economically viable options for farmers, particularly in the dry areas. In this paper, we present the results of an endogenous switching regression model which suggests, for the first time, that legume–cereal rotations have clear economic advantages over cereal monocropping. Rotations provide higher yields, gross margins, and consumption of wheat and faba beans. Most past economic analyses on rotation used data from experimental stations or small-sized farmer surveys covering only one season and variety. This study makes an important improvement by employing two-year data from a large sample of 1230 farm households and their 2643 fields cultivated with different varieties of wheat and faba beans in the wheat-based production system of Morocco. Assuming a biennial rotation – the fastest cycle possible in a rainfed dryland system, this paper is also the first to demonstrate that joint adoption of rotations and improved faba bean varieties leads to a two-year average gross margin that is US$537/ha (48%) higher than wheat monocropping. This is the highest economic benefit of all available cropping options. A striking result of the study is that, contrary to common expectations, adopters of rotation did not use lesser amounts of nitrogen fertilizer than those monocropping wheat, thereby undermining the ecological benefits of faba bean–wheat rotations. Given that current average applications are below marginal product-maximizing levels, higher marginal yields of nitrogen fertilizers after rotation help explain farmers’ current behavior. Our results suggest that: 1) promoting improved legume varieties may enhance adoption of rotation; and 2) an economic rationale should be used as the main driver of the rotation agenda in the dry areas.