Where in the value chain are we losing the most food? The case of wheat in Jordan 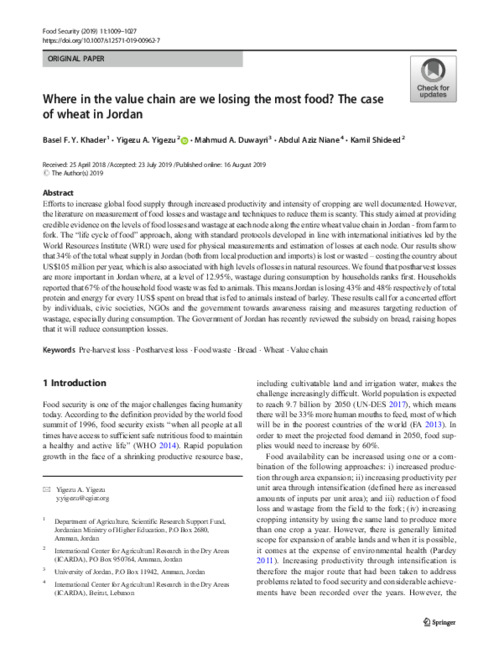 Efforts to increase global food supply through increased productivity and intensity of cropping are well documented. However, the literature on measurement of food losses and wastage and techniques to reduce them is scanty. This study aimed at providing credible evidence on the levels of food losses and wastage at each node along the entire wheat value chain in Jordan - from farm to fork. The “life cycle of food” approach, along with standard protocols developed in line with international initiatives led by the World Resources Institute (WRI) were used for physical measurements and estimation of losses at each node. Our results show that 34%of the total wheat supply in Jordan (both from local production and imports) is lost or wasted – costing the country about US$105 million per year, which is also associated with high levels of losses in natural resources.We found that postharvest losses are more important in Jordan where, at a level of 12.95%, wastage during consumption by households ranks first. Households reported that 67%of the household food waste was fed to animals. This means Jordan is losing 43%and 48%respectively of total protein and energy for every 1US$ spent on bread that is fed to animals instead of barley. These results call for a concerted effort by individuals, civic societies, NGOs and the government towards awareness raising and measures targeting reduction of wastage, especially during consumption. The Government of Jordan has recently reviewed the subsidy on bread, raising hopes that it will reduce consumption losses.