Multi-dimensional evaluation of response to salt stress in wheat 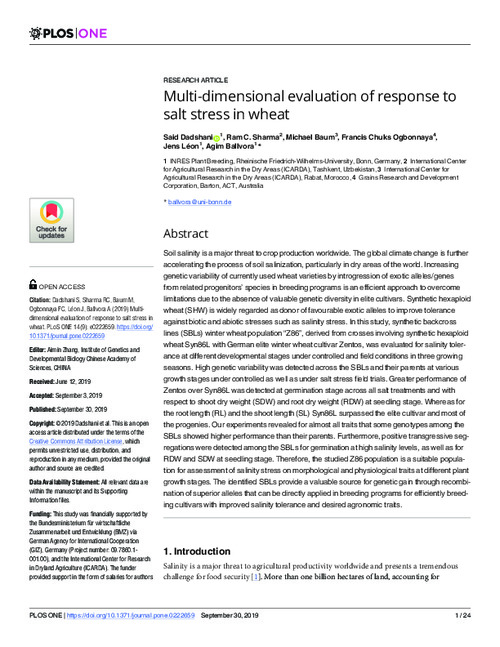 Soil salinity is a major threat to crop production worldwide. The global climate change is further accelerating the process of soil salinization, particularly in dry areas of the world. Increasing genetic variability of currently used wheat varieties by introgression of exotic alleles/genes from related progenitors’ species in breeding programs is an efficient approach to overcome limitations due to the absence of valuable genetic diversity in elite cultivars. Synthetic hexaploid wheat (SHW) is widely regarded as donor of favourable exotic alleles to improve tolerance against biotic and abiotic stresses such as salinity stress. In this study, synthetic backcross lines (SBLs) winter wheat population “Z86”, derived from crosses involving synthetic hexaploid wheat Syn86L with German elite winter wheat cultivar Zentos, was evaluated for salinity tolerance at different developmental stages under controlled and field conditions in three growing seasons. High genetic variability was detected across the SBLs and their parents at various growth stages under controlled as well as under salt stress field trials. Greater performance of Zentos over Syn86L was detected at germination stage across all salt treatments and with respect to shoot dry weight (SDW) and root dry weight (RDW) at seedling stage. Whereas for the root length (RL) and the shoot length (SL) Syn86L surpassed the elite cultivar and most of the progenies. Our experiments revealed for almost all traits that some genotypes among the SBLs showed higher performance than their parents. Furthermore, positive transgressive segregations were detected among the SBLs for germination at high salinity levels, as well as for RDW and SDW at seedling stage. Therefore, the studied Z86 population is a suitable population for assessment of salinity stress on morphological and physiological traits at different plant growth stages. The identified SBLs provide a valuable source for genetic gain through recombination of superior alleles that can be directly applied in breeding programs for efficiently breeding cultivars with improved salinity tolerance and desired agronomic traits.