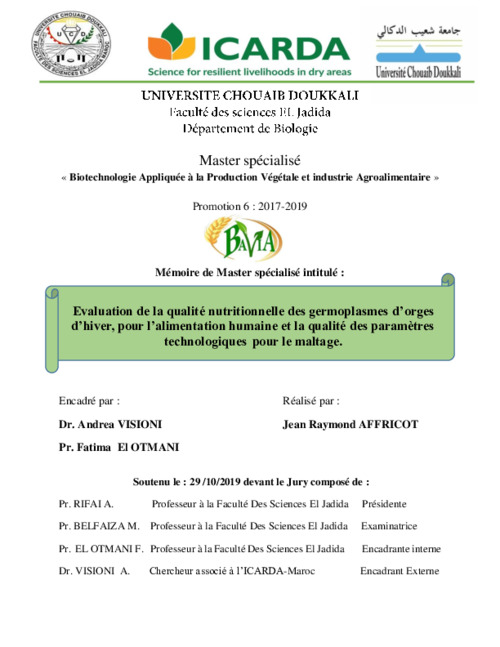 Barley varieties have undergone years of massive natural and peasant selection due to their particular characteristics (food, feed or malt) without any scientific background. Nowadays, interest in barley is even more intense and scientific advances make it possible to better understand the selection of barley varieties and their genetic improvements for desired traits, for food or for brewing during this study. The performance and nutritional quality of 65 genotypes from two different trials from the winter barley program (Hordeum vulgare L.), the ICARDA test station in Morocco Annaceur (Séfrou) were evaluated, the barley was malted, and the malt quality was analyzed. The characterization of nutritional quality revealed highly significant variations in starch and protein content within the collection of Trial 2. However, the difference was not significant for the beta-glucan content of the two tests and the concentrations found are below 3g/100g of dry matter. The difference was highly significant weight of 1000 grains, and provided a good indication of the potential yield of malt extract. The barley samples were well modified during malting. A very strong positive and significant correlation was found between FAN (Free Amino Acids of Malt) and malt extract yield (r=1**). Similarly, positive and very significant correlations (r=0.728**, r=0.672** and r=0.470**) were found between FAN and starch content, soluble malt proteins and protein content in barley, malt friability and starch content respectively. Negative and very significant correlations (r=-0.830**, r=-0.718**) were found between starch and protein content, malt extract yield and protein content respectively and finally a negative and significant correlation (r=-0.383* between alpha-amylase activity and beta-glucan content. The result of phenotypic screening showed that the accessions are mostly resistant to the reticulated stain of barley (Pyrenophora teres f. teres)