The magic of crop wild relatives in durum wheat breeding 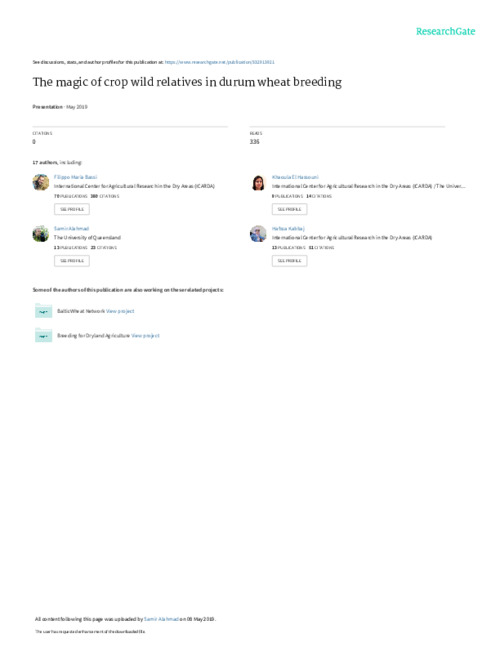 Durum wheat (Triticum durum Desf., 2n = 4x = 28, AABB) is the tenth most important crop in the world with an estimated production of 40 million tons in 2017 (Fig 1). Its global cultivation surface exceeds 18 million hectares, with Canada being the largest cultivator with 2.1 million ha, followed by Italy, Algeria and India with approximately 1.4 million ha each, then Turkey, Morocco, and Syria at 1.0-1.2 million ha, and in order of surface Ethiopia, Tunisia, Iran, France, Spain, Pakistan, and Greece cultivating 0.3-0.5 million ha each. Durum wheat is considered a staple food of the Mediterranean diet in the form of unleavened breads, bulgur (concassed grains), pasta, couscous (or Dalhia in India), and its straw is very important as feed for the animals. However, bulgur, pasta, and couscous are now also produced on industrial scale and the market value of the pasta industry alone was estimated at 11 billion USD in 2016, with an expansion trend projected at +20% in the next 5 years. This industry relies on durum wheat to produce high quality semolina. The average price of durum wheat is typically 15-20% higher than bread wheat (Fig 1), and premium price of 10-20% over the basic price are paid in developing countries when selling varieties with good grain color (yellow pigment), grain size (hectoliter weight), and especially protein content superior to 13%. In that sense, durum wheat has also become a major cash crop, that can provide good returns if the right varieties and agronomic practices are used. The farming of this tetraploid cereal crop spans a wide a range of climatic zones, varying from warm and dry to cool and wet environments. These are mostly located in areas subject to alternating favorable and stressed conditions depending on annual rainfall and temperatures (Mediterranean-type). Therefore, genetic improvement via breeding for tolerance to biotic and abiotic stresses remains a strategic practice to improve its productivity and stability. In the last decades, many durum wheat varieties have been developed based on field assessment for higher yield, disease resistance and technological seed qualities. However, the strong selection pressure imposed through genetic improvement has eroded a large part of the genetic diversity, hence resulting in a germplasm less prone to adapt to new environmental stresses, diseases and pests. Compared with domesticated varieties, crop wild relatives (CWR) and primitive wheats have been challenged in natural environments for thousands of years and maintain a much higher level of diversity. Hence, interspecific hybridization between durum elite lines and wild relatives of the Gramineae family is a promising method to restore variability to the modern breeding germplasm.