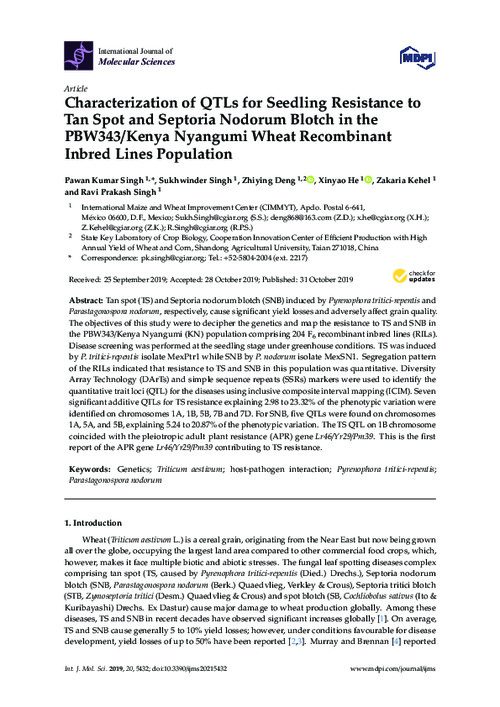 Tan spot (TS) and Septoria nodorum blotch (SNB) induced by Pyrenophora tritici-repentis and Parastagonospora nodorum, respectively, cause significant yield losses and adversely affect grain quality. The objectives of this study were to decipher the genetics and map the resistance to TS and SNB in the PBW343/Kenya Nyangumi (KN) population comprising 204 F6 recombinant inbred lines (RILs). Disease screening was performed at the seedling stage under greenhouse conditions. TS was induced by P. tritici-repentis isolate MexPtr1 while SNB by P. nodorum isolate MexSN1. Segregation pattern of the RILs indicated that resistance to TS and SNB in this population was quantitative. Diversity Array Technology (DArTs) and simple sequence repeats (SSRs) markers were used to identify the quantitative trait loci (QTL) for the diseases using inclusive composite interval mapping (ICIM). Seven significant additive QTLs for TS resistance explaining 2.98 to 23.32% of the phenotypic variation were identified on chromosomes 1A, 1B, 5B, 7B and 7D. For SNB, five QTLs were found on chromosomes 1A, 5A, and 5B, explaining 5.24 to 20.87% of the phenotypic variation. The TS QTL on 1B chromosome coincided with the pleiotropic adult plant resistance (APR) gene Lr46/Yr29/Pm39. This is the first report of the APR gene Lr46/Yr29/Pm39 contributing to TS resistance.