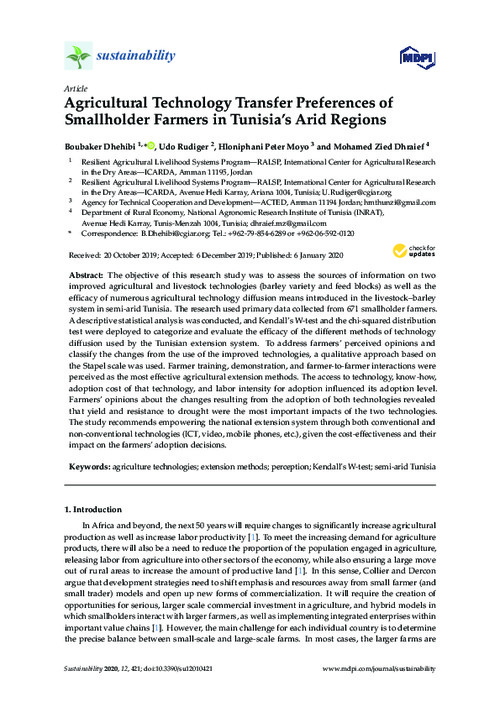 The objective of this research study was to assess the sources of information on two improved agricultural and livestock technologies (barley variety and feed blocks) as well as the efficacy of numerous agricultural technology diffusion means introduced in the livestock–barley system in semi-arid Tunisia. The research used primary data collected from 671 smallholder farmers. A descriptive statistical analysis was conducted, and Kendall’s W-test and the chi-squared distribution test were deployed to categorize and evaluate the efficacy of the different methods of technology diffusion used by the Tunisian extension system. To address farmers’ perceived opinions and classify the changes from the use of the improved technologies, a qualitative approach based on the Stapel scale was used. Farmer training, demonstration, and farmer-to-farmer interactions were perceived as the most effective agricultural extension methods. The access to technology, know-how, adoption cost of that technology, and labor intensity for adoption influenced its adoption level. Farmers’ opinions about the changes resulting from the adoption of both technologies revealed that yield and resistance to drought were the most important impacts of the two technologies. The study recommends empowering the national extension system through both conventional and non-conventional technologies (ICT, video, mobile phones, etc.), given the cost-effectiveness and their impact on the farmers’ adoption decisions