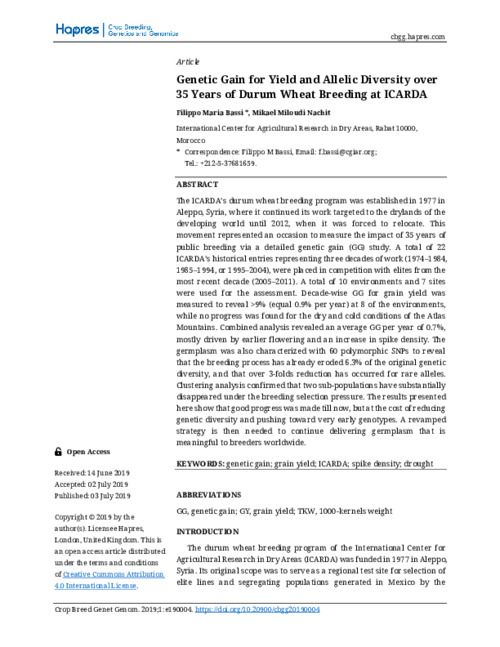 The ICARDA’s durum wheat breeding program was established in 1977 in Aleppo, Syria, where it continued its work targeted to the drylands of the developing world until 2012, when it was forced to relocate. This movement represented an occasion to measure the impact of 35 years of public breeding via a detailed genetic gain (GG) study. A total of 22 ICARDA’s historical entries representing three decades of work (1974–1984, 1985–1994, or 1995–2004), were placed in competition with elites from the most recent decade (2005–2011). A total of 10 environments and 7 sites were used for the assessment. Decade-wise GG for grain yield was measured to reveal >9% (equal 0.9% per year) at 8 of the environments, while no progress was found for the dry and cold conditions of the Atlas Mountains. Combined analysis revealed an average GG per year of 0.7%, mostly driven by earlier flowering and an increase in spike density. The germplasm was also characterized with 60 polymorphic SNPs to reveal that the breeding process has already eroded 6.3% of the original genetic diversity, and that over 3-folds reduction has occurred for rare alleles. Clustering analysis confirmed that two sub-populations have substantially disappeared under the breeding selection pressure. The results presented here show that good progress was made till now, but at the cost of reducing genetic diversity and pushing toward very early genotypes. A revamped strategy is then needed to continue delivering germplasm that is meaningful to breeders worldwide.