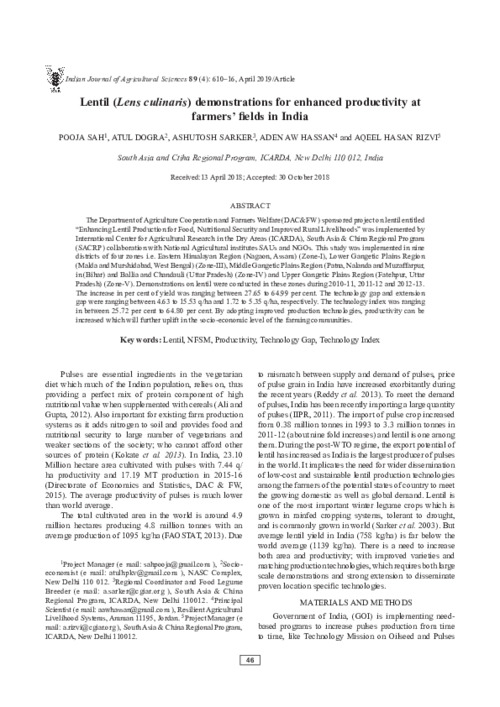 The Department of Agriculture Cooperation and Farmers Welfare (DAC&FW) sponsored project on lentil entitled “Enhancing Lentil Production for Food, Nutritional Security and Improved Rural Livelihoods” was implemented by International Center for Agricultural Research in the Dry Areas (ICARDA), South Asia & China Regional Program (SACRP) collaboration with National Agricultural institutes SAUs and NGOs. This study was implemented in nine districts of four zones i.e. Eastern Himalayan Region (Nagaon, Assam) (Zone-I), Lower Gangetic Plains Region (Malda and Murshidabad, West Bengal) (Zone-III), Middle Gangetic Plains Region (Patna, Nalanda and Muzaffarpur, in (Bihar) and Ballia and Chandauli (Uttar Pradesh) (Zone-IV) and Upper Gangetic Plains Region (Fatehpur, Uttar Pradesh) (Zone-V). Demonstrations on lentil were conducted in these zones during 2010-11, 2011-12 and 2012-13. The increase in per cent of yield was ranging between 27.65 to 64.99 per cent. The technology gap and extension gap were ranging between 4.63 to 15.53 q/ha and 1.72 to 5.35 q/ha, respectively. The technology index was ranging in between 25.72 per cent to 64.80 per cent. By adopting improved production technologies, productivity can be increased which will further uplift in the socio-economic level of the farming communities.