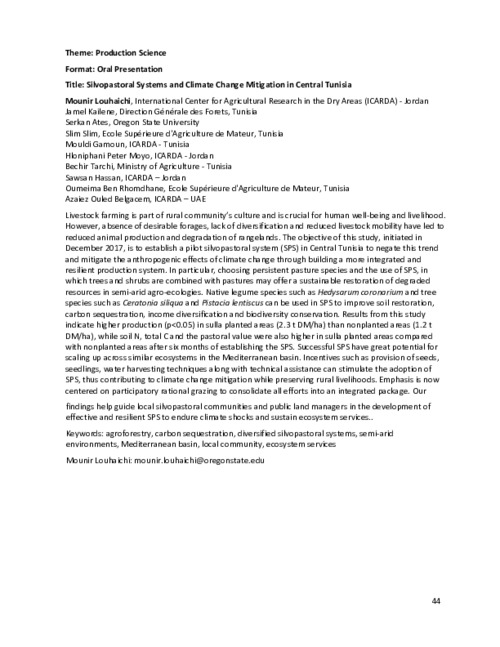 Livestock farming is part of rural community’s culture and is crucial for human well-being and livelihood. However, absence of desirable forages, lack of diversification and reduced livestock mobility have led to reduced animal production and degradation of rangelands. The objective of this study, initiated in December 2017, is to establish a pilot silvopastoral system (SPS) in Central Tunisia to negate this trend and mitigate the anthropogenic effects of climate change through building a more integrated and resilient production system. In particular, choosing persistent pasture species and the use of SPS, in which trees and shrubs are combined with pastures may offer a sustainable restoration of degraded resources in semi-arid agro-ecologies. Native legume species such as Hedysarum coronarium and tree species such as Ceratonia siliqua and Pistacia lentiscus can be used in SPS to improve soil restoration, carbon sequestration, income diversification and biodiversity conservation. Results from this study indicate higher production (p<0.05) in sulla planted areas (2.3 t DM/ha) than nonplanted areas (1.2 t DM/ha), while soil N, total C and the pastoral value were also higher in sulla planted areas compared with nonplanted areas after six months of establishing the SPS. Successful SPS have great potential for scaling up across similar ecosystems in the Mediterranean basin. Incentives such as provision of seeds, seedlings, water harvesting techniques along with technical assistance can stimulate the adoption of SPS, thus contributing to climate change mitigation while preserving rural livelihoods. Emphasis is now centered on participatory rational grazing to consolidate all efforts into an integrated package. Our findings help guide local silvopastoral communities and public land managers in the development of effective and resilient SPS to endure climate shocks and sustain ecosystem services.