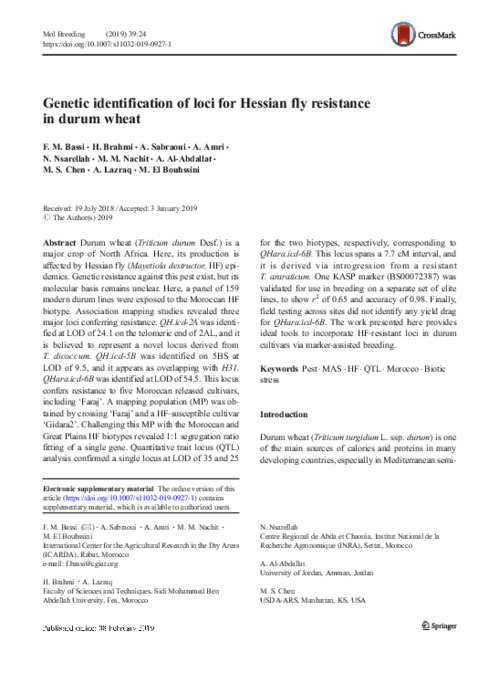 Durum wheat (Triticum durum Desf.) is a major crop of North Africa. Here, its production is affected by Hessian fly (Mayetiola destructor, HF) epidemics. Genetic resistance against this pest exist, but its molecular basis remains unclear. Here, a panel of 159 modern durum lines were exposed to the Moroccan HF biotype. Association mapping studies revealed three major loci conferring resistance. QH.icd-2Awas identified at LOD of 24.1 on the telomeric end of 2AL, and it is believed to represent a novel locus derived from T. dicoccum. QH.icd-5B was identified on 5BS at LOD of 9.5, and it appears as overlapping with H31. QHara.icd-6BwasidentifiedatLODof54.5.Thislocus confers resistance to five Moroccan released cultivars, including ‘Faraj’. A mapping population (MP) was obtained by crossing ‘Faraj’ and a HF-susceptible cultivar ‘Gidara2’. Challenging this MP with the Moroccan and Great Plains HF biotypes revealed 1:1 segregation ratio fitting of a single gene. Quantitative trait locus (QTL) analysis confirmed a single locus at LOD of 35 and 25 for the two biotypes, respectively, corresponding to QHara.icd-6B. This locus spans a 7.7 cM interval, and it is derived via introgression from a resistant T. araraticum. One KASP marker (BS00072387) was validated for use in breeding on a separate set of elite lines, to show r2 of 0.65 and accuracy of 0.98. Finally, field testing across sites did not identify any yield drag for QHara.icd-6B. The work presented here provides ideal tools to incorporate HF-resistant loci in durum cultivars via marker-assisted breeding.