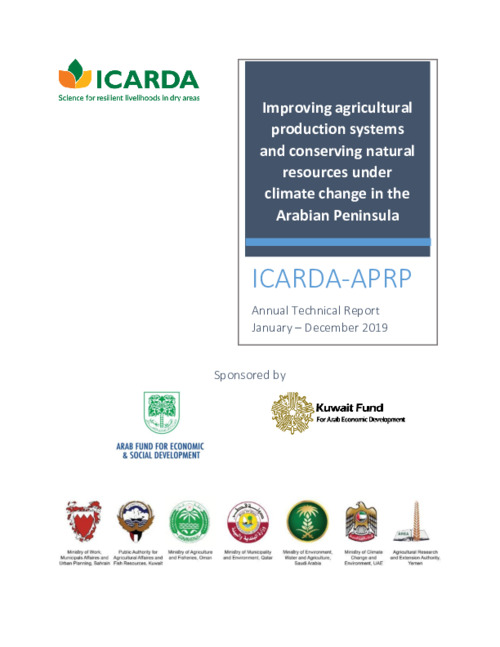 The present project “Improving agricultural production systems and conserving natural resources under climate change in the Arabian Peninsula” is funded by the Arab Fund for Economic and Social Development (AFESD), and the Kuwait Fund for Arab Economic Development (KFAED). It aims at improving agricultural productivity without depleting water and soil resources while increasing the resilience of farmers and farming systems to climatic change and enhancing the capacity of these systems to sequester carbon and mitigate climate change. The project consists of four major components: 1. Enhance National Agricultural Extension Systems (NAES) and Transfer of Technology Packages 2. Problem-solving Research and Impact Assessment 3. Capacity Building and Institutional Strengthening 4. Socio-economic benefits and impact assessments of the project’s targeted technologies This progress report highlights ICARDA and NARS joint activities and achievements between 1 January – 31 December 2019. Under the technology transfer component, 75 new pilot growers adopted the project targeted technologies, which consisted of 33 pilots for Irrigated forages and spineless cactus, 30 pilot sites on Soilless and IPPM packages under Protected Agriculture and 12 pilots for utilizing agricultural and agro-industrial by-products as an alternative animal feed resources during the reporting period. Considering the unsecure conditions and the related economic crisis, the use of feed blocks as an alternative feed resource and supplementation is considered appropriate for smallholder farmers, mainly women in Yemen. The activities related to the soilless production system and IPPM in Kuwait, where 8 new pilot growers adopt the technologies, is showing good results. The tomato and cucumber crop yield recorded at 12.66 and 13.39 kg/m2 during the reporting period respectively. Similarly, in Yemen, the water productivity of cucumber in pilot farms reached 140 kg/m3. The soilless production system showed a significant increase in net return compared to the soil-based production. The project also covered more than 20,500 ha of rangelands for rehabilitation and management activities compared to freely grazed areas (Control) in Kuwait (Al Wafra), Saudi Arabia (Doumet Al-Jandal, Tabarjal, and Bsita) and Yemen (Lahej). In Saudi Arabia, eleven new pilot growers rehabilitated their degraded rangelands by introducing native species recommended by the project team. The total area is about 400 ha. The range species include: Salsola tetranda, Traganum, Salsola villosa, Artiplex Leucoclada, Haloxylon salicornicum, and Anabasis stifera. In Kuwait, monitoring-assessing the dynamics of plant cover attributes in a rehabilitated degraded rangeland site at Al-Warf was developed in close collaboration between ICARDA and Public Authority for Agricultural Affair and Fish Resources (PAAF) and aims at monitoring the changes in the vegetation cover during several seasons through testing different techniques. In Yemen, To improve the adoption of the project targeted technologies and the efficiency of extension systems in the AP countries, ICARDA and NARES have developed a survey to be conducted on October-November 2019. It consists of a questionnaire that will permit the assessment of the status of the current extension systems and develop a dissemination strategy for the transfer of knowledge from research to the end users via extension agents. This will be preceded by a training workshop on “Information and Communication Technology to Enhance Agricultural Extension Systems” to be held on 14-18 October 2019. Furthermore, the project conducts a survey on major factors affecting the decision to adopt ICARDA-APRP technologies implemented in the GCC Countries and Yemen. The project conducted a number of research activities under component 2. Field trials on grass varieties (exotic and indigenous) assessed their water productivity under AP conditions. Clitoria, shows promising results in Qatar, UAE and Yemen. In UAE, some (5) drought and heat tolerant barley genotypes have shown very promoting performances regarding their production and adaptation to the very harsh environmental conditions. Buffel grass and Rhodes grass production were tested under Treated Wastewater (TWW) in Oman where results clearly show the higher yield and water productivity of Buffel grass. Data analysis related to chemical and heavy metal residue in plant and soil is in progress. In Kuwait, research activities were carried out on identifying indigenous medicinal and aromatic plant species. The five most desirable varieties of tomatoes identified by the farmers in UAE tested under soilless production system in cooled greenhouse and net house. The overall results showed that Marinza was the best in term of production, followed by SV4129. A study on a newly-designed greenhouse cooling system continued in collaboration with the American University of Ras Al-Khaima (AURAK). The water consumed for the cooling system during September and October was recorded at about 4 liters/day/m2 which is about 60% less than the water consumed in the standard pad and fan system during the same period. A study will be conducted in Kuwait, which focus on different organic mulches that can be locally obtained. The organic mulches include shredded paper from offices, recycled cardboard, wood chips, shredded palm fronds, and palm fronds. In Yemen, a survey was conducted on the availability of agricultural by-products in Abyan and Lahej area. The total agricultural crop residues in Lahej and Abyan reached 46,192 tons/year, which constitutes about 11.5% of the total production of crops grown. Sorghum occupies the first place in terms of quantity of residues, i.e. 36.9% of total residues followed by bananas with 18.1%. Research activities on rangeland rehabilitation and water harvesting techniques have been continued in Yemen, Kuwait, and Saudi Arabia. Different water harvesting techniques and shape are under investigation. Under component 3, ICARDA and its partners during this reporting period organized 18 field days, workshops and seminars throughout the visits of ICARDA scientists to the different Arabian Peninsula countries. During these events, ICARDA scientists provided technical backstopping and hands-on training to more than 250 researchers, extension agents and growers from the region. The program also organized 2 regional workshops on Use of Renewable Energy in the Management and Cooling of Hydroponics Nutrient Solution 17-20 March 2019, Oman; and Information and Communication Technology to Enhance Agricultural Extension Systems, Hammamet, Tunisia: 14-18 October 2019 where in total 44 participants attended. The project also held its second regional technical coordination meeting (RTCM) and steering committee meeting (RSCM) in Kuwait from 9 to 12 December in close collaboration with the Public Authority for Agricultural Affairs and Fish Resources. Thirty-seven (37) participants from seven AP countries NARS, ICARDA and donor organizations attended this event.

; goal 17 partnerships for the goals