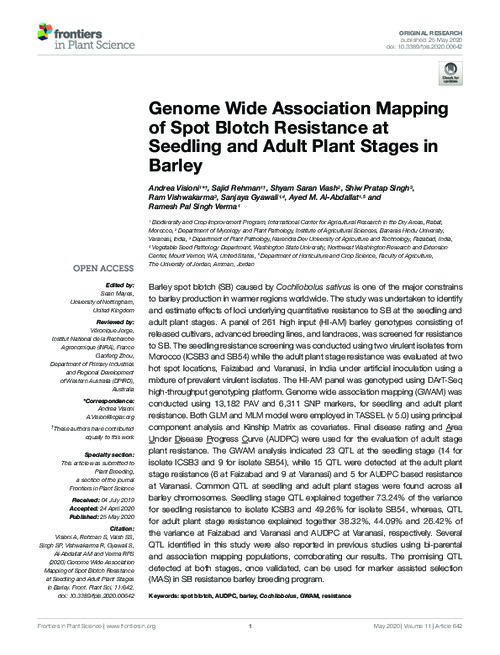 Barley spot blotch (SB) caused by Cochliobolus sativus is one of the major constrains to barley production in warmer regions worldwide. The study was undertaken to identify and estimate effects of loci underlying quantitative resistance to SB at the seedling and adult plant stages. A panel of 261 high input (HI-AM) barley genotypes consisting of released cultivars, advanced breeding lines, and landraces, was screened for resistance toSB.Theseedlingresistancescreeningwasconductedusingtwovirulentisolatesfrom Morocco (ICSB3 and SB54) while the adult plant stage resistance was evaluated at two hot spot locations, Faizabad and Varanasi, in India under artiﬁcial inoculation using a mixture of prevalent virulent isolates. The HI-AM panel was genotyped using DArT-Seq high-throughput genotyping platform. Genome wide association mapping (GWAM) was conducted using 13,182 PAV and 6,311 SNP markers, for seedling and adult plant resistance. Both GLM and MLM model were employed in TASSEL (v 5.0) using principal component analysis and Kinship Matrix as covariates. Final disease rating and Area Under Disease Progress Curve (AUDPC) were used for the evaluation of adult stage plant resistance. The GWAM analysis indicated 23 QTL at the seedling stage (14 for isolate ICSB3 and 9 for isolate SB54), while 15 QTL were detected at the adult plant stage resistance (6 at Faizabad and 9 at Varanasi) and 5 for AUDPC based resistance at Varanasi. Common QTL at seedling and adult plant stages were found across all barley chromosomes. Seedling stage QTL explained together 73.24% of the variance for seedling resistance to isolate ICSB3 and 49.26% for isolate SB54, whereas, QTL for adult plant stage resistance explained together 38.32%, 44.09% and 26.42% of the variance at Faizabad and Varanasi and AUDPC at Varanasi, respectively. Several QTL identiﬁed in this study were also reported in previous studies using bi-parental and association mapping populations, corroborating our results. The promising QTL detected at both stages, once validated, can be used for marker assisted selection (MAS) in SB resistance barley breeding program.