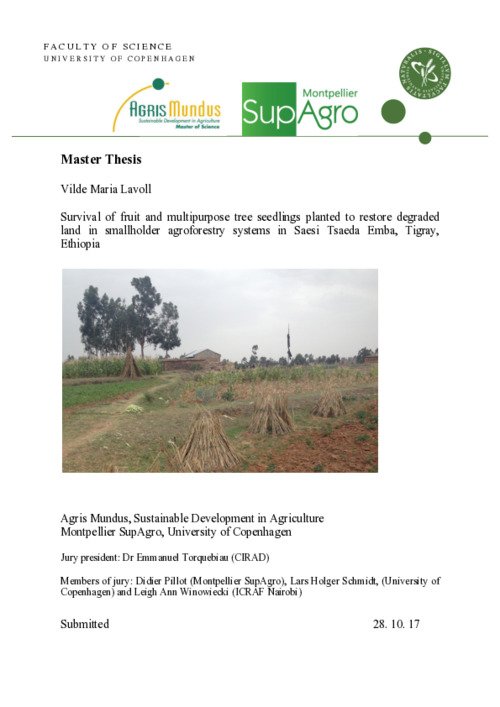 Land degradation has been a severe problem in the northern Ethiopian highlands and many studies have demonstrated that agroforestry can serve as a successful tool in restoring degraded lands. Tree planting has hence been included in many land restoration projects, but the survival of seedlings has been low. The objective of this study is therefore to better understand the factors affecting survival of tree seedlings planted to restore degraded land on smallscale farms in Saesi Tsaeda Emba woreda in Tigray, Ethiopia. The species Mangifera indica, Coffea arabica, Rhamnus priniodes, Psidium guajava, Casimiroa edulis, Faidherbia albida, Acacia seyal, Persea americana and Moringa oleifera were planted on 59 farms in three watersheds in an on-farm field trial, called planned comparison. Before planting the seedlings, participating farmers agreed upon certain irrigation and mulching treatments. Data on survival, growth, agroecological conditions, stress factors and seedling care were collected 12 months after planting and analysed using a logistic regression model. Focus groups and semi-structured interviews were used to triangulate the findings and to collect data on socioeconomic factors. Agroecological conditions were found to affect the survival of tree seedlings, but their resilience varied between species. Shade was the only agroecological condition that had a significant positive effect regardless of species. The practices fertilization and shelter had a significant positive effect on seedling survival, while fencing was found to be less important. Weak seedlings were an important mortality reason for Faidherbia albida. Treatments with the most water and most frequent irrigation had the highest survival rate, but it was also shown that the presence of mulch increases the probability of survival when the quantity and frequency of irrigation were reduced. Both the seedling care and survival differed significantly between socioeconomic groups. Farmers with limited labour capacity showed a significantly lower use of seedling care practices, but not a lower seedling survival, than the other farmers. The trees of old farmers were found to have a significantly higher survival than the other trees while the trees of young farmers had a significantly lower survival rate than the other trees. The study showed that the survival of tree seedlings is a result of complex interactions between species, agro ecological conditions and seedling care and studies with larger samples sizes are needed to identify single determinants of success or failure.