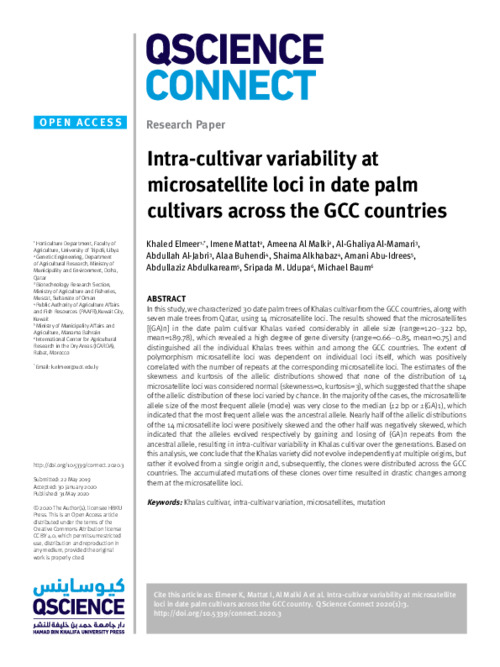 In this study, we characterized 30 date palm trees of Khalas cultivar from the GCC countries, along with seven male trees from Qatar, using 14 microsatellite loci. The results showed that the microsatellites [(GA)n] in the date palm cultivar Khalas varied considerably in allele size (range=120–322 bp, mean=189.78), which revealed a high degree of gene diversity (range=0.66–0.85, mean=0.75) and distinguished all the individual Khalas trees within and among the GCC countries. The extent of polymorphism microsatellite loci was dependent on individual loci itself, which was positively correlated with the number of repeats at the corresponding microsatellite loci. The estimates of the skewness and kurtosis of the allelic distributions showed that none of the distribution of 14 microsatellite loci was considered normal (skewness=0, kurtosis=3), which suggested that the shape of the allelic distribution of these loci varied by chance. In the majority of the cases, the microsatellite allele size of the most frequent allele (mode) was very close to the median (±2 bp or ±(GA)1), which indicated that the most frequent allele was the ancestral allele. Nearly half of the allelic distributions of the 14 microsatellite loci were positively skewed and the other half was negatively skewed, which indicated that the alleles evolved respectively by gaining and losing of (GA)n repeats from the ancestral allele, resulting in intra-cultivar variability in Khalas cultivar over the generations. Based on this analysis, we conclude that the Khalas variety did not evolve independently at multiple origins, but rather it evolved from a single origin and, subsequently, the clones were distributed across the GCC countries. The accumulated mutations of these clones over time resulted in drastic changes among them at the microsatellite loci.