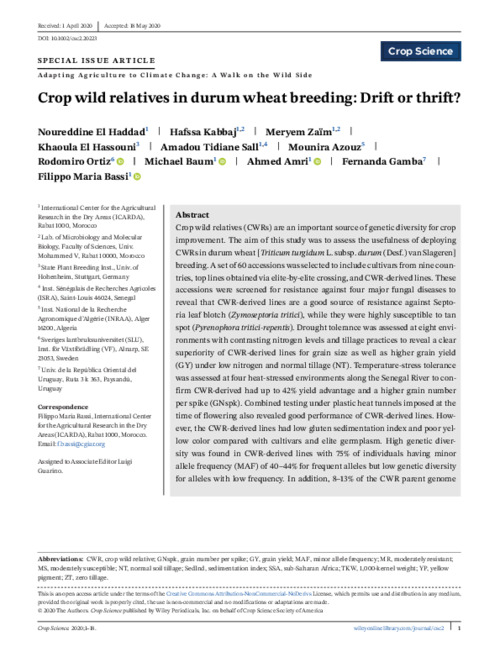 Crop wild relatives (CWR) are an important source of genetic diversity for crop improvement. The aim of this study was to assess the usefulness of deploying CWR in durum wheat breeding (Triticum turgidum ssp. durum). A set of 60 accessions was selected to include cultivars from nine countries, top lines obtained via elite-by-elite crossing, and CWRderived lines. These accessions were screened for resistance against four major fungal diseases to reveal that CWR-derived lines are a good source of resistance against Septoria leaf blotch (Zymoseptoria tritici), while they were highly susceptible to tan spot (Pyrenophora tritici-repentis). Drought tolerance was assessed at eight environments with contrasting nitrogen levels and tillage practices to reveal a clear superiority of CWR-derived lines for grain size, as well as higher grain yield under low nitrogen and normal tillage. Temperature stress tolerance was assessed at four heat-stressed environments along the Senegal River to confirm CWR-derived had up to 42% yield advantage and a higher grain number per spike. Combined testing under plastic heat tunnels imposed at the time of flowering also revealed good performance of CWR-derived lines. However, the CWRderived lines had low gluten sedimentation index and poor yellow color compared to cultivars and elite germplasm. High genetic diversity was found in CWR-derived lines with 75% of individuals having minor allele frequency of 40 to 44% for frequent alleles, but low genetic diversity for alleles with low frequency. In addition, 8-13% of the CWR parent genome was retained in the derived progenies, which contributed to improve several phenotypic traits.