Coupling hydrological and irrigation schedule models for the management of surface and groundwater resources in Khorezm, Uzbekistan 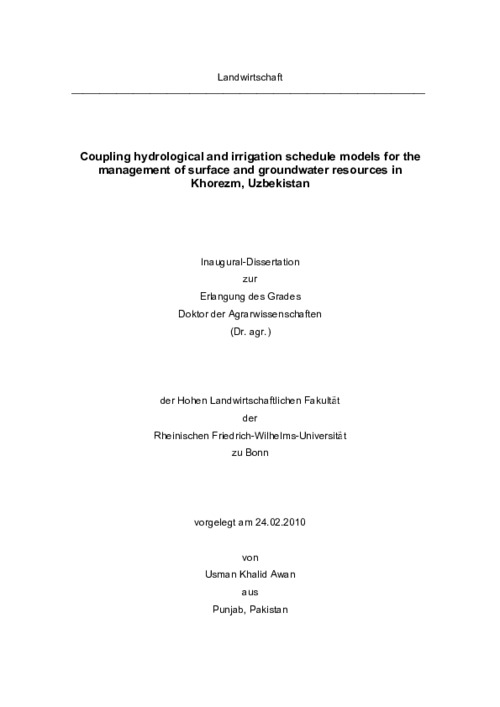 Usman Awan. (1/1/2010). Coupling hydrological and irrigation schedule models for the management of surface and groundwater resources in Khorezm, Uzbekistan. Germany: University of Bonn.

The irrigated agriculture in the Khorezm region of Uzbekistan is characterized by huge water withdrawals from the Amu Darya River. The vast infrastructure built for extensive irrigation, together with inappropriate drainage infrastructure, leads to a build-up of very shallow groundwater (GW) levels, followed by waterlogging and salt accumulation in the soil profile. Previous studies revealed deficits in the management and maintenance institutions, inappropriate and inflexible irrigation strategies, poor linkages between field level demands, and in the operation of the network. No flexible water management tool is currently in use that, by pre-conceiving mitigation strategies, would aim at reducing the current yield reductions. This study aimed to develop and introduce such a tool at the irrigation scheme level, illustrated at the example of the Water Users Association (WUA) Shomakhulum in Khorezm (about 2,000 ha of farmland). The tool can support managerial decisions on optimization of water use, particularly under the deficitary water supply predicted under climate change. Remote Sensing (RS) techniques (SEBAL) were used in combination with real-time hydrological measurements (e.g., ponding experiments to estimate losses in canals) to assess the operational performance of the WUA. Delivery performance ratio (DPR), relative evapotranspiration (RET), depleted fraction (DF), drainage ratio (DR), overall consumed ratio (OCR), field application ratio (FAR) and conveyance ratio (CR) were used as performance indicators. Using the current and target values for FAR and CR, three improved irrigation efficiency scenarios were developed (S-A: baseline or business-as-usual (BAU), S-B: improving CR; S-C: raising FAR; S-D: improving FAR and CR together). Recharge to the aquifer was determined for these scenarios by the water balance approach. Spatial dynamics of GW levels and soil characteristics (factors that affect recharge) were represented by dividing the WUA into ‘hydrological response units’. The FEFLOW-3D model was used to simulate GW dynamics under the scenarios. Recharge rates—through which the scenarios impact on GW— were a major input to this model. Simulated GW levels served in turn as an input to the HYDRUS-1D model used to estimate the capillary rise contribution of the GW to water demands of the key crops cotton, winter wheat and vegetables. The daily capillary rise was in turn fed into the CROPWAT model to simulate optimal irrigation scheduling (IS) and different water management scenarios. This novel hierarchical coupling of RS/GIS with the FEFLOW, HYDRUS and CROPWAT models was applied to the WUA area for an optimal management of surface and GW. Operational performance of the irrigation system under BAU is very poor. Although RET (0.82) is near to target value (0.75), a DPR >1 indicates inefficient use of the supplied water. The FAR shows that under BAU 57 % of the delivered water is lost during application. The values of DF (0.4), OCR (0.51) and DR (0.55) do not match target values postulated in the literature, suggesting severe flaws in water distribution. Results of the water balance model show that the average recharge to the WUA under BAU (4 mm d-1) can be reduced to 3.4, 1.8 and 1.4 mm d-1 in S-B, S-C and S-D, respectively. FEFLOW simulations show that improvements in irrigation efficiency alone can lower the GW levels by 12 cm (S-B), 38 cm (SC) and 44 cm (S-D) compared to the BAU. Furthermore, HYDRUS-1D modeling shows that GW contributes up to 19% to the WUA’s total water requirement under BAU. This would be reduced to 17, 11 and 9 % for S-B, S-C and S-D, respectively, leading to lower salt accumulation but higher net irrigation requirements. Simulated IS under BAU shows a 7 % (official IS) and 41.6 % (farmers’ practice) reduction in cotton yield from the optimum IS. To mitigate adverse effects of water scarcity, the optimal IS was developed assuming 25 and 50 % reduced surface water supplies. Minimum yield losses with 25 % reduced water supply will be in the range of 10-20 %, and with water reduction of 50 % will be up to 22-30 %. Three water saving scenarios (WSS-1: introducing crops of low water demand, WSS-2: leaving marginal land out, and WSS-3: improving the irrigation efficiency) were introduced. Water savings of 9, 20 and 41 % can be achieved for WSS-1, WSS-2 and WSS-3, respectively. The results of the study provide important guidelines for the water management institutes in the region.