Water Productivity Of Cotton In Fergana Valley Of Central Asia 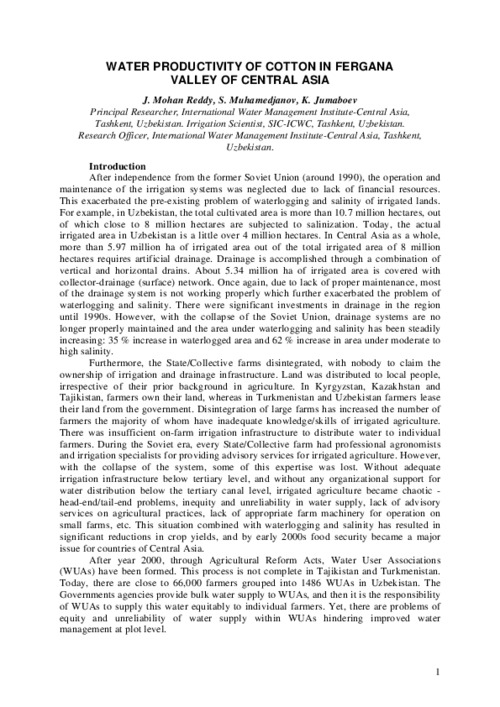 After independence from the former Soviet Union (around 1990), the operation and maintenance of the irrigation systems was neglected due to lack of financial resources. This exacerbated the pre-existing problem of waterlogging and salinity of irrigated lands. For example, in Uzbekistan, the total cultivated area is more than 10.7 million hectares, out of which close to 8 million hectares are subjected to salinization. Today, the actual irrigated area in Uzbekistan is a little over 4 million hectares. In Central Asia as a whole, more than 5.97 million ha of irrigated area out of the total irrigated area of 8 million hectares requires artificial drainage. Drainage is accomplished through a combination of vertical and horizontal drains. About 5.34 million ha of irrigated area is covered with collector-drainage (surface) network. Once again, due to lack of proper maintenance, most of the drainage system is not working properly which further exacerbated the problem of waterlogging and salinity. There were significant investments in drainage in the region until 1990s. However, with the collapse of the Soviet Union, drainage systems are no longer properly maintained and the area under waterlogging and salinity has been steadily increasing: 35 % increase in waterlogged area and 62 % increase in area under moderate to high salinity.