Effect of nurse crops and seeding rate on the persistence, productivity and nutritive value of sainfoin in a cereal-based production system 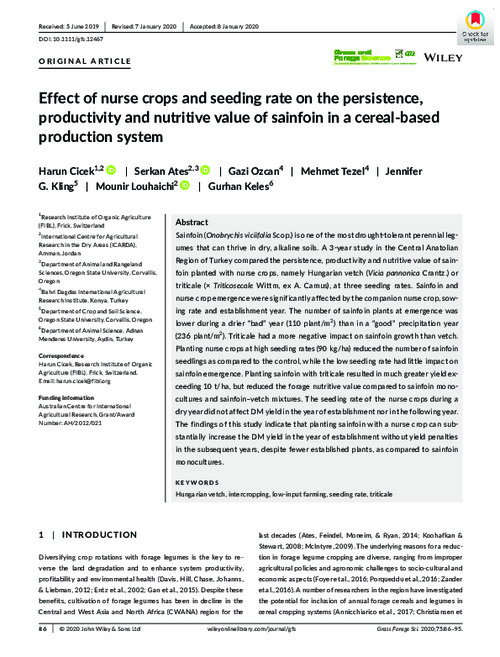 Sainfoin (Onobrychis viciifolia Scop.) is one of the most drought-tolerant perennial legumes that can thrive in dry, alkaline soils. A 3-year study in the Central Anatolian Region of Turkey compared the persistence, productivity and nutritive value of sainfoin planted with nurse crops, namely Hungarian vetch (Vicia pannonica Crantz.) or triticale (× Triticosecale Wittm, ex A. Camus), at three seeding rates. Sainfoin and nurse crop emergence were significantly affected by the companion nurse crop, sowing rate and establishment year. The number of sainfoin plants at emergence was lower during a drier “bad” year (110 plant/m2) than in a “good” precipitation year (236 plant/m2). Triticale had a more negative impact on sainfoin growth than vetch. Planting nurse crops at high seeding rates (90 kg/ha) reduced the number of sainfoin seedlings as compared to the control, while the low seeding rate had little impact on sainfoin emergence. Planting sainfoin with triticale resulted in much greater yield exceeding 10 t/ha, but reduced the forage nutritive value compared to sainfoin monocultures and sainfoin–vetch mixtures. The seeding rate of the nurse crops during a dry year did not affect DM yield in the year of establishment nor in the following year. The findings of this study indicate that planting sainfoin with a nurse crop can substantially increase the DM yield in the year of establishment without yield penalties in the subsequent years, despite fewer established plants, as compared to sainfoin monocultures.