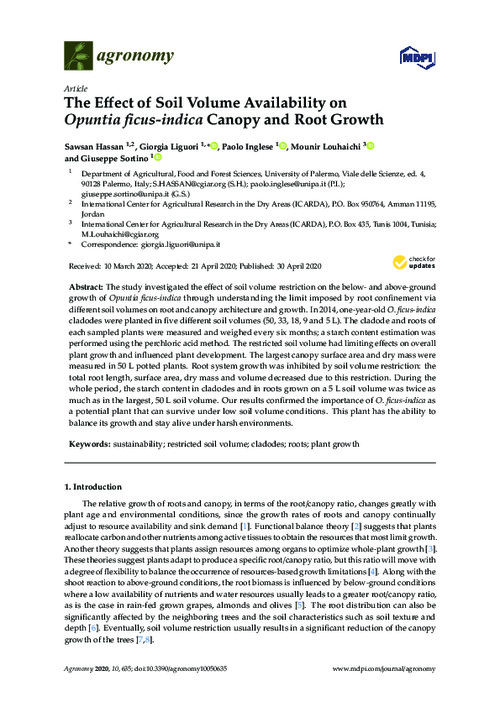 The study investigated the e_ect of soil volume restriction on the below- and above-ground growth of Opuntia ficus-indica through understanding the limit imposed by root confinement via di_erent soil volumes on root and canopy architecture and growth. In 2014, one-year-old O. ficus-indica cladodes were planted in five di_erent soil volumes (50, 33, 18, 9 and 5 L). The cladode and roots of each sampled plants were measured and weighed every six months; a starch content estimation was performed using the perchloric acid method. The restricted soil volume had limiting e_ects on overall plant growth and influenced plant development. The largest canopy surface area and dry mass were measured in 50 L potted plants. Root system growth was inhibited by soil volume restriction: the total root length, surface area, dry mass and volume decreased due to this restriction. During the whole period, the starch content in cladodes and in roots grown on a 5 L soil volume was twice as much as in the largest, 50 L soil volume. Our results confirmed the importance of O. ficus-indica as a potential plant that can survive under low soil volume conditions. This plant has the ability to balance its growth and stay alive under harsh environments.