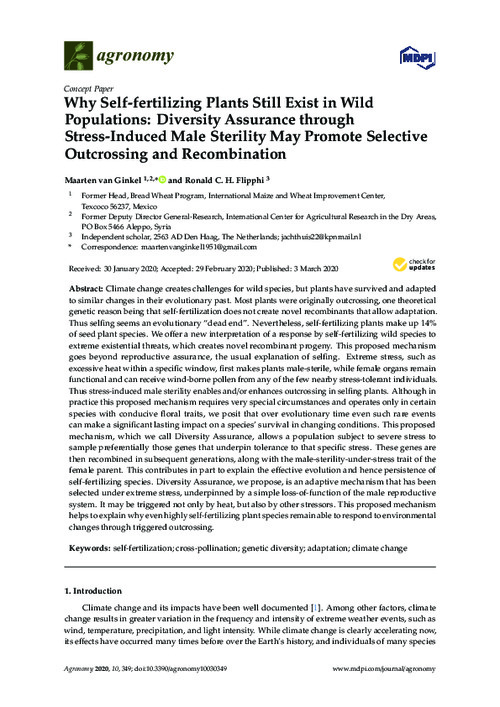 Climate change creates challenges for wild species, but plants have survived and adapted to similar changes in their evolutionary past. Most plants were originally outcrossing, one theoretical genetic reason being that self-fertilization does not create novel recombinants that allow adaptation. Thus selfing seems an evolutionary “dead end”. Nevertheless, self-fertilizing plants make up 14% of seed plant species. We offer a new interpretation of a response by self-fertilizing wild species to extreme existential threats, which creates novel recombinant progeny. This proposed mechanism goes beyond reproductive assurance, the usual explanation of selfing. Extreme stress, such as excessive heat within a specific window, first makes plants male-sterile, while female organs remain functional and can receive wind-borne pollen from any of the few nearby stress-tolerant individuals. Thus stress-induced male sterility enables and/or enhances outcrossing in selfing plants. Although in practice this proposed mechanism requires very special circumstances and operates only in certain species with conducive floral traits, we posit that over evolutionary time even such rare events can make a significant lasting impact on a species’ survival in changing conditions. This proposed mechanism, which we call Diversity Assurance, allows a population subject to severe stress to sample preferentially those genes that underpin tolerance to that specific stress. These genes are then recombined in subsequent generations, along with the male-sterility-under-stress trait of the female parent. This contributes in part to explain the effective evolution and hence persistence of self-fertilizing species. Diversity Assurance, we propose, is an adaptive mechanism that has been selected under extreme stress, underpinned by a simple loss-of-function of the male reproductive system. It may be triggered not only by heat, but also by other stressors. This proposed mechanism helps to explain why even highly self-fertilizing plant species remain able to respond to environmental changes through triggered outcrossing.