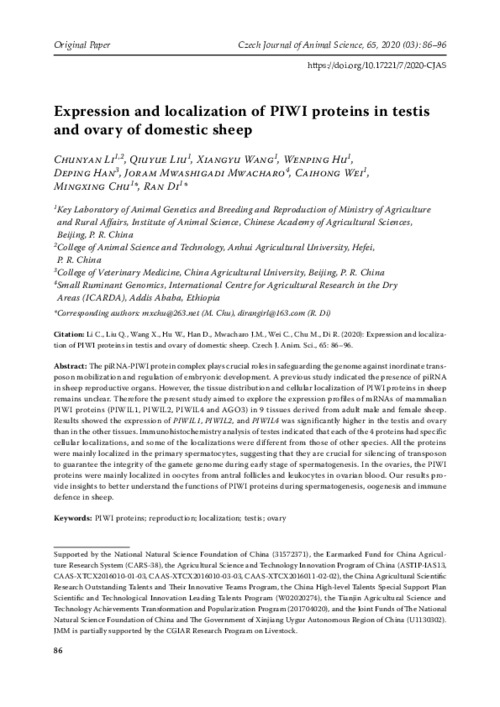 The piRNA-PIWI protein complex plays crucial roles in safeguarding the genome against inordinate transposon mobilization and regulation of embryonic development. A previous study indicated the presence of piRNA in sheep reproductive organs. However, the tissue distribution and cellular localization of PIWI proteins in sheep remains unclear. Therefore the present study aimed to explore the expression profiles of mRNAs of mammalian PIWI proteins (PIWIL1, PIWIL2, PIWIL4 and AGO3) in 9 tissues derived from adult male and female sheep. Results showed the expression of PIWIL1, PIWIL2, and PIWIL4 was significantly higher in the testis and ovary than in the other tissues. Immunohistochemistry analysis of testes indicated that each of the 4 proteins had specific cellular localizations, and some of the localizations were different from those of other species. All the proteins were mainly localized in the primary spermatocytes, suggesting that they are crucial for silencing of transposon to guarantee the integrity of the gamete genome during early stage of spermatogenesis. In the ovaries, the PIWI proteins were mainly localized in oocytes from antral follicles and leukocytes in ovarian blood. Our results provide insights to better understand the functions of PIWI proteins during spermatogenesis, oogenesis and immune defence in sheep.