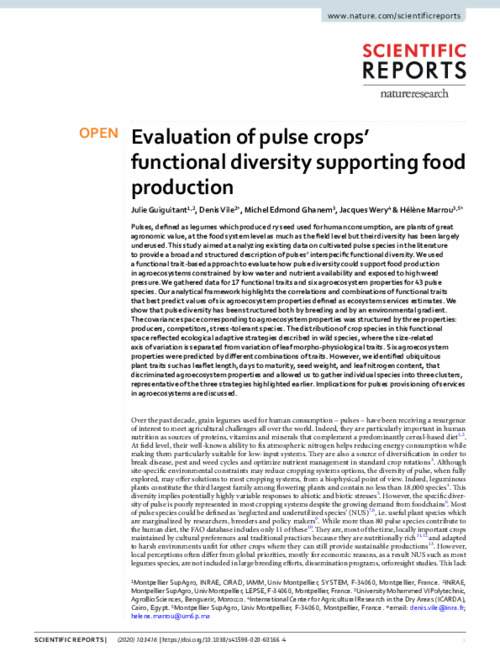 Pulses, defined as legumes which produce dry seed used for human consumption, are plants of great agronomic value, at the food system level as much as the field level but their diversity has been largely underused. This study aimed at analyzing existing data on cultivated pulse species in the literature to provide a broad and structured description of pulses’ interspecific functional diversity. We used a functional trait-based approach to evaluate how pulse diversity could support food production in agroecosystems constrained by low water and nutrient availability and exposed to high weed pressure. We gathered data for 17 functional traits and six agroecosystem properties for 43 pulse species. Our analytical framework highlights the correlations and combinations of functional traits that best predict values of six agroecosystem properties defined as ecosystem services estimates. We show that pulse diversity has been structured both by breeding and by an environmental gradient. The covariance space corresponding to agroecosystem properties was structured by three properties: producers, competitors, stress-tolerant species. The distribution of crop species in this functional space refected ecological adaptive strategies described in wild species, where the size-related axis of variation is separated from variation of leaf morpho-physiological traits. Six agroecosystem properties were predicted by different combinations of traits. However, we identified ubiquitous plant traits such as leafet length, days to maturity, seed weight, and leaf nitrogen content, that discriminated agroecosystem properties and allowed us to gather individual species into three clusters, representative of the three strategies highlighted earlier. Implications for pulses provisioning of services in agroecosystems are discussed