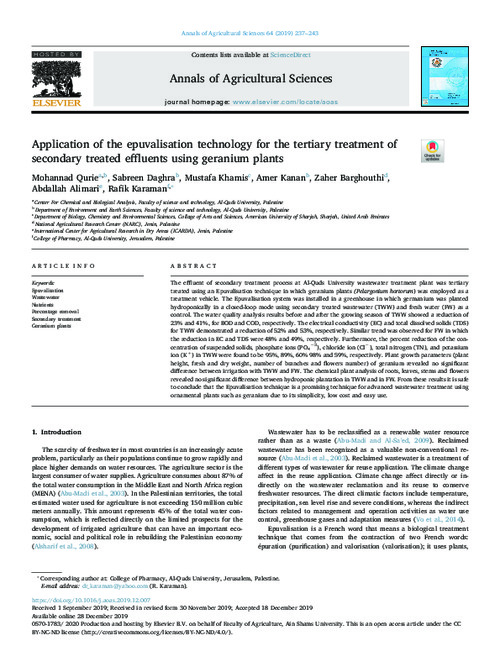 The effluent of secondary treatment process at Al-Quds University wastewater treatment plant was tertiary treated using an Epuvalisation technique in which geranium plants (Pelargonium hortorum) was employed as a treatment vehicle. The Epuvalisation system was installed in a greenhouse in which germanium was planted hydroponically in a closed-loop mode using secondary treated wastewater (TWW) and fresh water (FW) as a control. The water quality analysis results before and after the growing season of TWW showed a reduction of 23% and 41%, for BOD and COD, respectively. The electrical conductivity (EC) and total dissolved solids (TDS) for TWW demonstrated a reduction of 52% and 53%, respectively. Similar trend was observed for FW in which the reduction in EC and TDS were 48% and 49%, respectively. Furthermore, the percent reduction of the concentration of suspended solids, phosphate ions (PO4−3), chloride ion (Cl−), total nitrogen (TN), and potassium ion (K+) in TWW were found to be 95%, 89%, 60% 98% and 59%, respectively. Plant growth parameters (plant height, fresh and dry weight, number of branches and flowers number) of geranium revealed no significant difference between irrigation with TWW and FW. The chemical plant analysis of roots, leaves, stems and flowers revealed no significant difference between hydroponic plantation in TWW and in FW. From these results it is safe to conclude that the Epuvalisation technique is a promising technique for advanced wastewater treatment using ornamental plants such as geranium due to its simplicity, low cost and easy use.