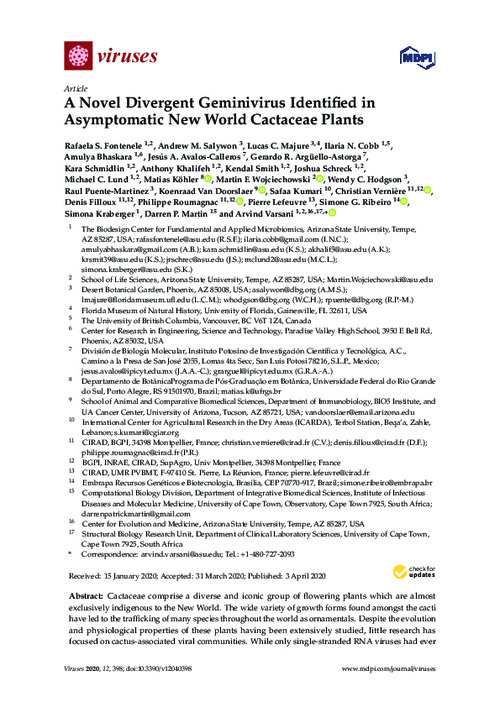 Cactaceae comprise a diverse and iconic group of flowering plants which are almost exclusively indigenous to the New World. The wide variety of growth forms found amongst the cacti have led to the trafficking of many species throughout the world as ornamentals. Despite the evolution and physiological properties of these plants having been extensively studied, little research has focused on cactus-associated viral communities. While only single-stranded RNA viruses had ever been reported in cacti, here we report the discovery of cactus-infecting single-stranded DNA viruses. These viruses all apparently belong to a single divergent species of the family Geminiviridae and have been tentatively named Opuntia virus 1 (OpV1). A total of 79 apparently complete OpV1 genomes were recovered from 31 different cactus plants (belonging to 20 different cactus species from both the Cactoideae and Opuntioideae clades) and from nine cactus-feeding cochineal insects (Dactylopius sp.) sampled in the USA and Mexico. These 79 OpV1 genomes all share > 78.4% nucleotide identity with one another and < 64.9% identity with previously characterized geminiviruses. Collectively, the OpV1 genomes display evidence of frequent recombination, with some genomes displaying up to five recombinant regions. In one case, recombinant regions span similar to 40% of the genome. We demonstrate that an infectious clone of an OpV1 genome can replicate in Nicotiana benthamiana and Opuntia microdasys. In addition to expanding the inventory of viruses that are known to infect cacti, the OpV1 group is so distantly related to other known geminiviruses that it likely represents a new geminivirus genus. It remains to be determined whether, like its cactus hosts, its geographical distribution spans the globe.