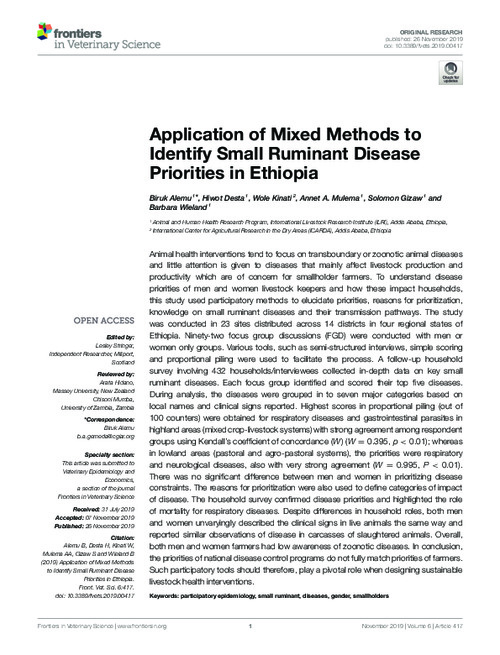 Animal health interventions tend to focus on transboundary or zoonotic animal diseases and little attention is given to diseases that mainly affect livestock production and productivity which are of concern for smallholder farmers. To understand disease priorities of men and women livestock keepers and how these impact households, this study used participatory methods to elucidate priorities, reasons for prioritization, knowledge on small ruminant diseases and their transmission pathways. The study was conducted in 23 sites distributed across 14 districts in four regional states of Ethiopia. Ninety-two focus group discussions (FGD) were conducted with men or women only groups. Various tools, such as semi-structured interviews, simple scoring and proportional piling were used to facilitate the process. A follow-up household survey involving 432 households/interviewees collected in-depth data on key small ruminant diseases. Each focus group identified and scored their top five diseases. During analysis, the diseases were grouped in to seven major categories based on local names and clinical signs reported. Highest scores in proportional piling (out of 100 counters) were obtained for respiratory diseases and gastrointestinal parasites in highland areas (mixed crop-livestock systems) with strong agreement among respondent groups using Kendall's coefficient of concordance (W) (W = 0.395, p < 0.01); whereas in lowland areas (pastoral and agro-pastoral systems), the priorities were respiratory and neurological diseases, also with very strong agreement (W = 0.995, P < 0.01). There was no significant difference between men and women in prioritizing disease constraints. The reasons for prioritization were also used to define categories of impact of disease. The household survey confirmed disease priorities and highlighted the role of mortality for respiratory diseases. Despite differences in household roles, both men and women unvaryingly described the clinical signs in live animals the same way and reported similar observations of disease in carcasses of slaughtered animals. Overall, both men and women farmers had low awareness of zoonotic diseases. In conclusion, the priorities of national disease control programs do not fully match priorities of farmers. Such participatory tools should therefore, play a pivotal role when designing sustainable livestock health interventions.