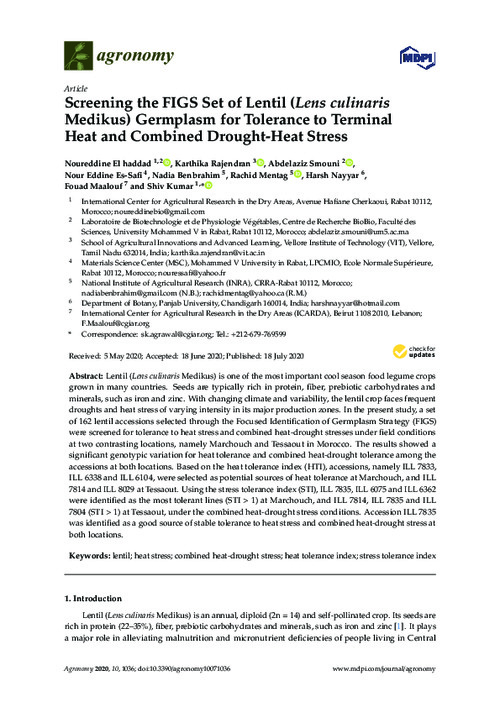 Lentil (Lens culinarisMedikus) is one of the most important cool season food legume crops grown in many countries. Seeds are typically rich in protein, fiber, prebiotic carbohydrates and minerals, such as iron and zinc. With changing climate and variability, the lentil crop faces frequent droughts and heat stress of varying intensity in its major production zones. In the present study, a set of 162 lentil accessions selected through the Focused Identification of Germplasm Strategy (FIGS) were screened for tolerance to heat stress and combined heat-drought stresses under field conditions at two contrasting locations, namely Marchouch and Tessaout in Morocco. The results showed a significant genotypic variation for heat tolerance and combined heat-drought tolerance among the accessions at both locations. Based on the heat tolerance index (HTI), accessions, namely ILL 7833, ILL 6338 and ILL 6104, were selected as potential sources of heat tolerance at Marchouch, and ILL 7814 and ILL 8029 at Tessaout. Using the stress tolerance index (STI), ILL 7835, ILL 6075 and ILL 6362 were identified as the most tolerant lines (STI > 1) at Marchouch, and ILL 7814, ILL 7835 and ILL 7804 (STI > 1) at Tessaout, under the combined heat-drought stress conditions. Accession ILL 7835 was identified as a good source of stable tolerance to heat stress and combined heat-drought stress at both locations.