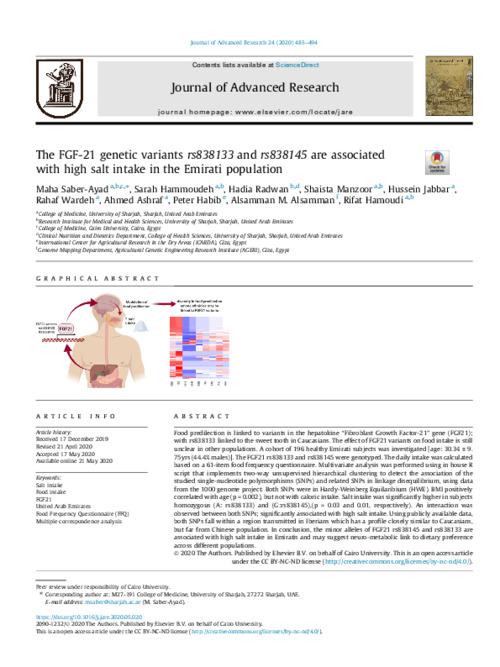 Food predilection is linked to variants in the hepatokine Fibroblast Growth Factor-21 gene (FGF21); with rs838133 linked to the sweet tooth in Caucasians. The effect of FGF21 variants on food intake is still unclear in other populations. A cohort of 196 healthy Emirati subjects was investigated [age: 30.34 +/- 9. 75yrs (44.4% males)]. The FGF21 rs838133 and rs838145 were genotyped. The daily intake was calculated based on a 61-item food frequency questionnaire. Multivariate analysis was performed using in house R script that implements two-way unsupervised hierarchical clustering to detect the association of the studied single-nucleotide polymorphisms (SNPs) and related SNPs in linkage disequilibrium, using data from the 1000 genome project. Both SNPs were in Hardy-Weinberg Equilaribium (HWE). BMI positively correlated with age (p = 0.002), but not with caloric intake. Salt intake was significantly higher in subjects homozygous (A: rs838133) and (G:rs838145),(p = 0.03 and 0.01, respectively). An interaction was observed between both SNPs; significantly associated with high salt intake. Using publicly available data, both SNPs fall within a region transmitted in Iberians which has a profile closely similar to Caucasians, but far from Chinese population. In conclusion, the minor alleles of FGF21 rs838145 and rs838133 are associated with high salt intake in Emiratis and may suggest neuro-metabolic link to dietary preference across different populations. (C) 2020 The Authors. Published by Elsevier B.V. on behalf of Cairo University. This is an open access article under the CC BY-NC-ND license (http://creativecommons.org/licenses/by-nc-nd/4.0/).