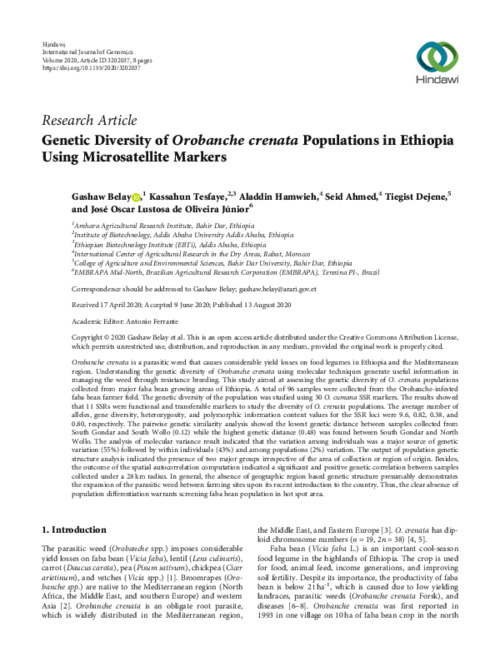 Orobanche crenata is a parasitic weed that causes considerable yield losses on food legumes in Ethiopia and the Mediterranean region. Understanding the genetic diversity of Orobanche crenata using molecular techniques generate useful information in managing the weed through resistance breeding. This study aimed at assessing the genetic diversity of O. crenata populations collected from major faba bean growing areas of Ethiopia. A total of 96 samples were collected from the Orobanche-infested faba bean farmer ﬁeld. The genetic diversity of the population was studied using 30 O. cumana SSR markers. The results showed that 11 SSRs were functional and transferable markers to study the diversity of O. crenata populations. The average number of alleles, gene diversity, heterozygosity, and polymorphic information content values for the SSR loci were 9.6, 0.82, 0.38, and 0.80, respectively. The pairwise genetic similarity analysis showed the lowest genetic distance between samples collected from South Gondar and South Wollo (0.12) while the highest genetic distance (0.48) was found between South Gondar and North Wollo. The analysis of molecular variance result indicated that the variation among individuals was a major source of genetic variation (55%) followed by within individuals (43%) and among populations (2%) variation. The output of population genetic structure analysis indicated the presence of two major groups irrespective of the area of collection or region of origin. Besides, the outcome of the spatial autocorrelation computation indicated a signiﬁcant and positive genetic correlation between samples collected under a 28km radius. In general, the absence of geographic region based genetic structure presumably demonstrates the expansion of the parasitic weed between farming sites upon its recent introduction to the country. Thus, the clear absence of population diﬀerentiation warrants screening faba bean population in hot spot area.