Differential heat sensitivity of two cool-season legumes, chickpea and lentil, at the reproductive stage, is associated with responses in pollen function, photosynthetic ability and oxidative damage 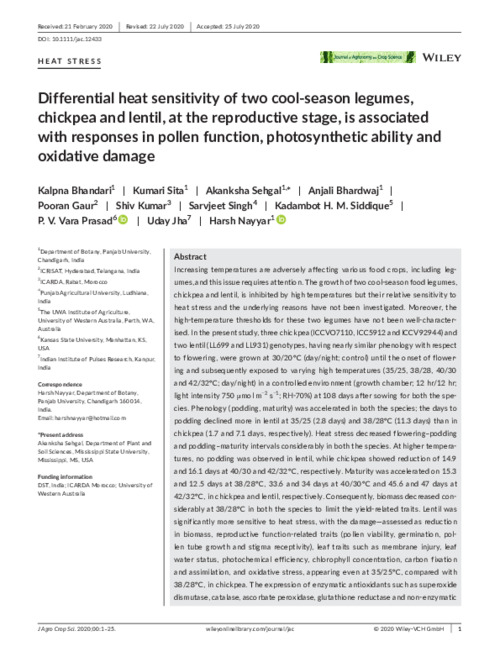 Increasing temperatures are adversely affecting various food crops, including legumes, and this issue requires attention. The growth of two cool‐season food legumes, chickpea and lentil, is inhibited by high temperatures but their relative sensitivity to heat stress and the underlying reasons have not been investigated. Moreover, the high‐temperature thresholds for these two legumes have not been well‐characterised. In the present study, three chickpea (ICCVO7110, ICC5912 and ICCV92944) and two lentil (LL699 and LL931) genotypes, having nearly similar phenology with respect to flowering, were grown at 30/20°C (day/night; control) until the onset of flowering and subsequently exposed to varying high temperatures (35/25, 38/28, 40/30 and 42/32°C; day/night) in a controlled environment (growth chamber; 12 hr/12 hr; light intensity 750 µmol m−2 s−1; RH‐70%) at 108 days after sowing for both the species. Phenology (podding, maturity) was accelerated in both the species; the days to podding declined more in lentil at 35/25 (2.8 days) and 38/28°C (11.3 days) than in chickpea (1.7 and 7.1 days, respectively). Heat stress decreased flowering–podding and podding–maturity intervals considerably in both the species. At higher temperatures, no podding was observed in lentil, while chickpea showed reduction of 14.9 and 16.1 days at 40/30 and 42/32°C, respectively. Maturity was accelerated on 15.3 and 12.5 days at 38/28°C, 33.6 and 34 days at 40/30°C and 45.6 and 47 days at 42/32°C, in chickpea and lentil, respectively. Consequently, biomass decreased considerably at 38/28°C in both the species to limit the yield‐related traits. Lentil was significantly more sensitive to heat stress, with the damage—assessed as reduction in biomass, reproductive function‐related traits (pollen viability, germination, pollen tube growth and stigma receptivity), leaf traits such as membrane injury, leaf water status, photochemical efficiency, chlorophyll concentration, carbon fixation and assimilation, and oxidative stress, appearing even at 35/25°C, compared with 38/28°C, in chickpea. The expression of enzymatic antioxidants such as superoxide dismutase, catalase, ascorbate peroxidase, glutathione reductase and non‐enzymatic antioxidants declined remarkably with heat stress, more so in lentil than in chickpea. Carbon fixation (assessed as Rubisco activity) and assimilation (assessed as sucrose concentration, sucrose synthase activity) were also reduced more in lentil than in chickpea, at all the stressful temperatures, resulting in more inhibition of plant biomass (shoot + roots), damage to reproductive function and severe reduction in pods and seeds. At 38/28°C, lentil showed 43% reduction in biomass, while it declined by 17.2% in chickpea at the same time, over the control temperature (30/20°C). At this temperature, lentil showed 53% and 46% reduction in pods and seed yield, compared to 13.4% and 22% decrease in chickpea at the same temperature. At 40/30°C, lentil did not produce any pods, while chickpea was able to produce few pods at this temperature. This study identified that lentil is considerably more sensitive to heat stress than chickpea, as a result of more damage to leaves (photosynthetic ability; oxidative injury) and reproductive components (pollen function, etc.) at 35/25°C and above, at controlled conditions.