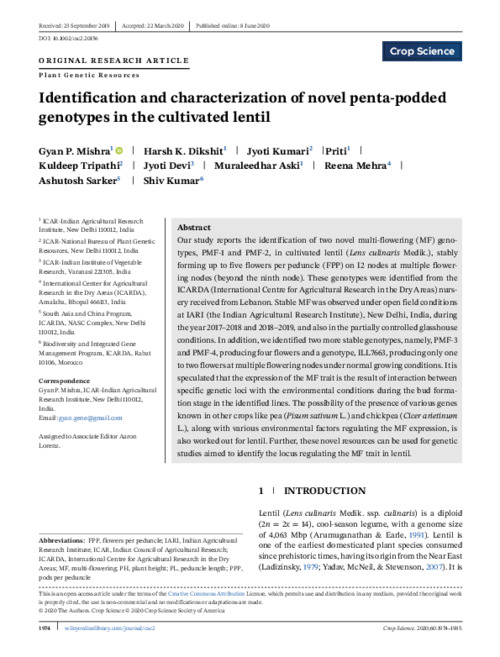 Our study reports the identification of two novel multi-flowering (MF) genotypes, PMF-1 and PMF-2, in cultivated lentil (Lens culinaris Medik.), stably forming up to five flowers per peduncle (FPP) on I2 nodes at multiple flowering nodes (beyond the ninth node). These genotypes were identified from the ICARDA (International Centre for Agricultural Research in the Dry Areas) nursery received fromLebanon. StableMF was observed under open field conditions at IARI (the Indian Agricultural Research Institute), New Delhi, India, during the year 2017–2018 and 2018–2019, and also in the partially controlled glasshouse conditions. In addition, we identified twomore stable genotypes, namely, PMF-3 and PMF-4, producing four flowers and a genotype, ILL7663, producing only one to two flowers at multiple flowering nodes under normal growing conditions. It is speculated that the expression of the MF trait is the result of interaction between specific genetic loci with the environmental conditions during the bud formation stage in the identified lines. The possibility of the presence of various genes known in other crops like pea (Pisum sativum L.) and chickpea (Cicer arietinum L.), along with various environmental factors regulating the MF expression, is also worked out for lentil. Further, these novel resources can be used for genetic studies aimed to identify the locus regulating the MF trait in lentil.